aLL STaR Performance is proud to announce their partnership with General Motors for the 2010 SEMA Show and the 2011 season.

aLL STaR Performance, led by Gene Marcel will be designing and building a truly unique 2011 Chevrolet Camaro SS, which will make its debut at the 2011 SEMA Show. Marcel and his team are no strangers to the car customizing world, having started out in South Florida in the late 90′s and now continuing in Southern California. Since 1996, Gene and his team have been involved with a wide variety of automobiles ranging from two high profile Bomex Honda Accords to their latest 2010 project, an Infiniti G37 Coupe. In between those builds, the guys from aLL STaR have also designed, built and toured a tuner style Scion xB, a Euro styled Volvo S40, a VIP themed Infiniti G35, as well as a 2006 and 2009 Honda Fit.

There are plenty of things to get excited about with this build, starting off with the rendering done by the Gurnade Design Firm. Gurnade was in charge of taking a list of ideas from paper and working their magic to transform it into what you see in the rendering.

Some of the highlights to the aLL STaR Performance Chevrolet Camaro SS include a set of 22x11” Forgestar wheels, a custom set of Baer brakes, Air Lift
digital suspension, Lysholm supercharger and a custom paint mix thanks to Dupont.

Over the next few months leading up to the SEMA show the entire build will be documented by Marcel and his team. Be sure to keep up to date with progress on the aLL STaR Performance Chevrolet Camaro SS by following the entire build-up on the 2010 SEMA Project Build Ups (http://www.facebook.com/semabuildups) page on Facebook! 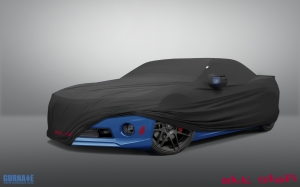