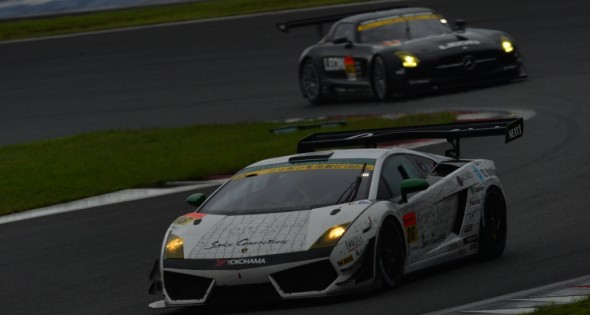 The FUJI GT 300km RACE, Round 6 of the AUTOBACS SUPER GT, took place at Fuji Speedway (one lap 4.563km x 66 laps) in Shizuoka Pref. on Sept. 8. In difficult conditions with rain drizzles on and off, the winner of the GT500 class was the No. 38 ZENT CERUMO SC430 driven by Yuji Tachikawa and Kohei Hirate. The GT300 class winner was the No. 4 GSR HATSUNEMIKU BMW driven by Nobuteru Taniguchi and Tatsuya Kataoka.

On race day at Fuji Speedway there was rain in the morning, but by noon the rain had stopped and the track was mostly dry by the time of the race start at 14:00. In these relatively good track conditions, the No. 38 ZENT CERUMO SC430 driven by Kohei Hirate made a good start from pole position. The ZENT CERUMO SC430 ran in the lead with its fellow Lexus car, the No. 37 KeePer TOM'S SC430 driven by Andrea Caldarelli, in tow until the Safety Car came out to control the race after machine trouble caused a machine to crash on the 21st lap. During the time it took to clear up the aftermath of the crash, the ZENT CERUMO SC430 had lost most of its margin of lead. When it became possible for the teams to make pit stops, the ZENT CERUMO SC430 and most of the other cars in the lead group made their routine pit stops and changed drivers. Because some teams didn’t make their routine stops, however, the ZENT CERUMO SC430 had given up the lead by the time it returned to the race with Yuji Tachikawa now at the wheel, and what’s more, it was hit by another car in its first lap out of the pit and ended up in 5th position as a result. But knowing that not getting the win in this race would effectively end the ZENT CERUMO SC430 team’s title chances, Tachikawa began a hard charge through the pack amid constantly changing conditions as rain began to fall on and off. Finally, by the 43rd lap of the race, Tachikawa regained the lead. From this point on, Tachikawa would face a tough challenge from the No. 17 KEIHIN HSV-010 (Koudai Tsukakoshi) but in the end he lived up to his reputation as a mater at the Fuji course and always a strong finisher by fending off the challenge to give his team its first victory of the season.

This was the second win of the season for the LEXUS SC430 and its 18th overall. For Tachikawa it is his 15th GT500 career win, bringing him into a tie for most wins by a driver. For Hirate it was his fifth win.

In the GT300 class, the No. 4 GSRHATSUNEMIKU BMW driven by Nobuteru Taniguchi and Tatsuya Kataoka started from 5th position on the starting grid and took advantage of some fast pit work just after the Safety car came out and succeeded in taking the lead among the cars that had made quick pit stops. After that, the BMW’s second stint driver Taniguchi did a magnificent job of handling the slippery conditions after rain began to fall. In the end, he scored the team’s first win of the season with a massive 47-second lead over 2nd place at the finish.

This was the fifth win overall for the BMW Z4 in GT300 class competition. For Taniguchi it is his 13th win, and for Kataoka it is his sixth. 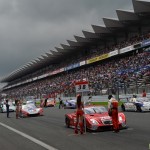 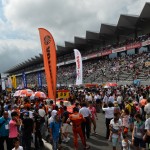 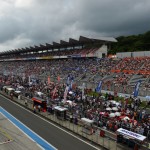 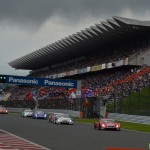 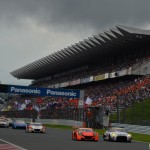 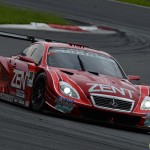 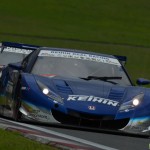 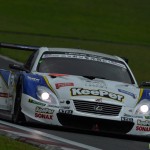 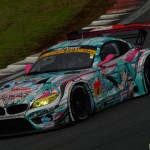 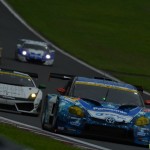 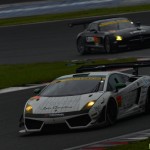 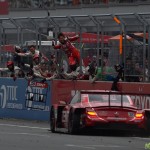 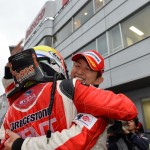 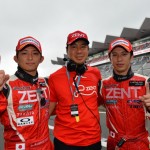 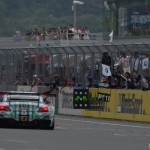 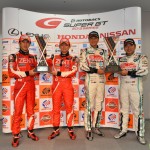