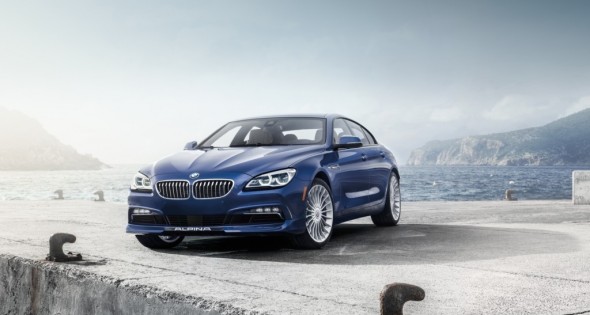 The new 2016 model year BMW ALPINA B6 xDrive Gran Coupe gains subtle BMW enhancements and benefits in particular from the results of continuous development by ALPINA. The four-door Gran Coupe, already widely recognized for aesthetic beauty and impressive driving performance, raises the benchmark with exciting new details. The new BMW ALPINA B6 xDrive Gran Coupe will become available to order starting in March 2015, with US deliveries slated to begin at BMW Centers in June. Pricing will be announced closer to the on-sale date.

The BMW ALPINA B6 xDrive Gran Coupe is available as a special-order vehicle with capacity-limited production underscoring its exclusivity. The B6’s body is manufactured in the BMW 6 Series factory (Plant Dingolfing) and hand-finished with the remaining ALPINA components at the ALPINA factory in Buchloe, Germany. The hand-finishing sequence at ALPINA increases the production lead-time by approximately two weeks. European Delivery at the BMW Welt delivery center is available for the BMW ALPINA B6, as is BMW Performance Center Delivery in Greer, SC, USA.

A more-dynamic front spoiler and fascia enclose the subtly-revised BMW kidney grill, and shape the transition to the new ALPINA hood which features character chines, lending the new B6 xDrive Gran Coupe an even more powerful appearance and accentuate its class-leading performance potential.

The 4.4 liter V8 Bi-Turbo V-8 engine – known amongst aficionados as the embodiment of power, torque and refinement – now delivers an astonishing 600 horsepower at 6,000 rpm and maximum torque of 590 lb-ft at only 3,500 rpm (all figures preliminary). The increase in output of 60 hp over the 2015 model has been achieved through extensive rework of the air intake ducting and air filter housing, with enhancements to the fuel supply system. Coupling the BMW xDrive intelligent all-wheel drive system with an ALPINA-developed performance calibration means the new B6 xDrive Gran Coupe delivers heroic straight-line performance. With a 0 – 60 mph acceleration time of only 3.6 seconds (preliminary), it is the fastest-accelerating BMW ALPINA model ever developed. The new B6 xDrive Gran Coupe is capable of a maximum speed of 200 mph (electronically limited).

The powerful brake system now features blue calipers with ALPINA lettering on the front axle with brake discs measuring 374 x 36 mm on the front and 370 x 24 on the rear (increased from 345 x 24 mm).

The standard equipment level has been extended to include attractive features such as Full LED Adaptive Headlights with High Beam Assistant, and a discrete new B6 model designation in the B-pillar in high-gloss Shadow Line.

Refined performance with powerful delivery.
Continuous development of the 4.4 liter V8 Bi-Turbo V-8 engine has resulted in a number of upgrades leading to a significant increase in power output in the new B6 xDrive Gran Coupe. The engine now develops 600 hp at 6,000 rpm and a maximum torque of 590 lb-ft between 3,500 and 4,500 rpm (preliminary figures).

Two specifically-constructed, large-diameter turbochargers, operating in parallel, are primarily responsible for achieving a high power and torque output over a very broad engine speed range, without sacrificing spontaneous throttle response at low rpm. The high-performance water-air intercooler system with a short intake distances consists of a large-volume low-temperature heat exchanger, and two near-engine intercoolers. Additional oil and water coolers are located just behind the front spoiler to ensure overall thermodynamic efficiency of the engine. Extensive optimization of the air intake ducting and air filter housing leads to a substantial reduction of losses, which together with an upgraded fuel supply system results in the hike in output of 60 hp over the previous model year.

Inside the cylinders, specific MAHLE pistons are designed to deal with temperatures and pressures associated with up to 1.2 bar (17.4 psi) boost pressure and the engine’s 10.0:1 nominal compression ratio.

ALPINA-tuned 8-speed Sport Automatic transmission.
Adapted and tested in co-operation with ZF, the advanced ALPINA SWITCH-TRONIC 8-Speed Sport Automatic transmission is perfectly tailored to the power and torque of the V-8 Bi-Turbo engine. It excels equally in the disciplines sport and comfort, playing a central role in infusing the B6 xDrive Gran Coupe with ALPINA typical characteristics.

In Sport (S) Shift Mode, the transmission becomes significantly more dynamic, gear changes are executed faster and feedback becomes more direct. The system allows for multi-simultaneous downshifts in only milliseconds, wherein the transmission will skip several gears depending on engine loads and speeds to select the most favorable gear for optimum acceleration.

The Manual (M) Shift Mode allows full driver control over the transmission. The ALPINA SWITCH-TRONIC buttons are ergonomically mounted on the rear of the steering wheel, their actuation allowing the driver to shift up or down as required. A unique feature of the transmission software in Manual (M) Shift Mode in combination with the selection of Sport+ or DSC OFF Mode using the Driving Dynamics Control button is the cancellation of automatic upshift function. In this mode of operation, the transmission will maintain the selected gear up to maximum engine speed and will not automatically upshift to the next gear. This is desirable in certain driving situations, for example during especially dynamic driving on roads with multiple tight hair-pin corners, or on race track segments featuring pronounced elevation change.

Hardware modifications to the transmission, output and driveshafts enable unrestrained power delivery. In combination with the single-cylinder fade-out and ALPINA specific software modifications, this eliminates the common reduction of torque required by the transmission in order to up-shift. This allows super-quick upshifts under full loads which, together with xDrive intelligent all-wheel drive, means the B6 xDrive Gran Coupe requires only 3.6 seconds for the sprint from 0 – 60 mph (preliminary).

BMW xDrive intelligent all-wheel drive.
The ALPINA all-wheel drive system exploits the technical potential of BMW’s xDrive system and its intelligent, dynamic distribution of drive power which continuously and variably distributes torque between the front and rear axle within milliseconds, for a maximum of traction and control.

For the BMW ALPINA B6 xDrive Gran Coupe, the programming of the torque distribution control system, which is interconnected with the Dynamic Stability Control (DSC) and engine management system, is performance-oriented and increases driving agility and dynamics – especially under lateral acceleration – while maintaining a neutral balance. Besides allowing optimum traction under acceleration by eliminating slip-induced losses, the system continuously monitors a wide range of sensory inputs – for example steering angle, lateral acceleration, yaw angle and speed - to distribute torque to achieve maximum safety in challenging conditions or when encountering sudden changes in road surface friction.

Exhaust system.
The B6 xDrive Gran Coupe features a full stainless steel exhaust system with ALPINA trademark elliptical twin tailpipes. The character of the deep exhaust note is prominent but not intrusive. Active exhaust valves allow balance between enthusiasm and comfort on long journeys. The driver can influence the sound experience using the Driving Dynamics Control button. In Comfort Mode, the exhaust valve is closed up to 2,500 rpm, and in Sport Mode the valve is permanently open.

The ALPINA-specific calibration of dampers and stabilizers is tied into other system parameters including torque distribution, stability control, steering assistance, and throttle response.

Stiffer springs and increased front wheel camber, combined with the 20” staggered ALPINA CLASSIC wheel and tire set, result in direct steering response and precise handling. The high performance MICHELIN Pilot Super Sport tires forego run-flat technology in order to maximize comfort and they have a high speed rating to allow for the B6 xDrive Gran Coupe’s maximum possible speed of 200 mph. The dimensions of the rear wheel and tire have increased to 10” x 20” and 295/30 ZR20 for improved traction while the front dimensions remain at 8.5” x 20” and 255/35 ZR 20.

All season tires measuring 255/35 front and 285/30 rear are available as a factory option. Vehicles supplied with this option from the factory have a non-removable limited top speed of 130 mph. ALPINA recommends the appropriate use of performance summer tires and winter tires according to weather conditions for the best performance, handling and safety of your BMW ALPINA vehicle.

Exterior design.
The ALPINA design features blend seamlessly and stylishly into the surfaces and lines of the BMW 6 Series Gran Coupe, accentuating its dynamic, graceful silhouette.

A new, more aggressive front spoiler and apron enclose the subtly-changed BMW kidney grill and shape the transition to the new hood with character chines. These lend the new B6 xDrive Gran Coupe an even more authoritative appearance and hint at the enormous performance potential of the V-8 Bi-Turbo engine.

The design and shape of the new ALPINA front spoiler ensures the effective flow of sufficient air to the radiator modules of the performance cooling-system, including inter-cooler, water and oil. A subtle, integrated splitter directs air over and around rather than underneath the vehicle, thereby stabilizing the front end at high speeds.

Special NACA air channels at the front of the underbody suck cold air towards the powerful brake system with blue calipers which are visible through the delicate spokes of the ALPINA CLASSIC 20” wheels. Large diameter brake discs measuring 374 x 36 mm on the front and 370 x 24 mm on the rear (up from 345 x 24 mm) guarantee effective brake performance.

Interior & equipment.
The new B6 xDrive Gran Coupe has a comprehensive, comfort orientated range of standard equipment, a luxurious interior, and only the highest-quality materials. Nappa leather and a leather instrument panel remain standard in addition to essential features such as electric comfort seats. The BMW Navigation system with BMW ConnectedDrive services is also standard.

Blue ALPINA instrumentation, an ALPINA steering wheel covered in hand-stitched LAVALINA leather, the ALPINA production plaque overhead, door sill trims with blue illuminated ALPINA lettering, and the classic ALPINA luxury wood trim in Myrtle or Piano lacquer – these are some of the exclusive features of the B6 xDrive Gran Coupe’s interior. 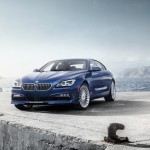 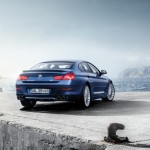 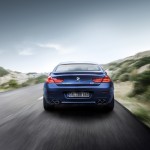 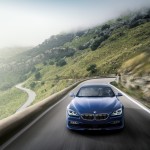 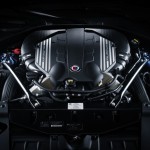 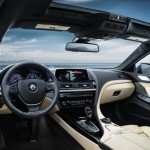