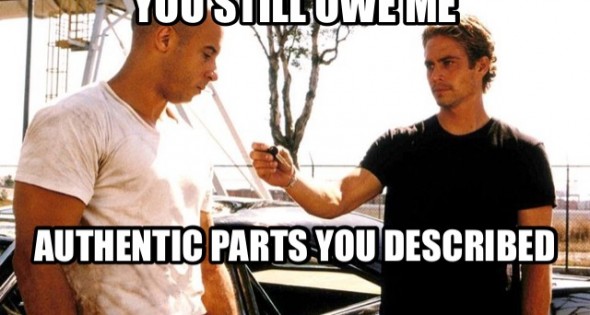 I was scrolling through my social newsfeed today when something popped up that I just shook my head at in disbelief. A little background first before I explain what I saw.

In general the automotive community is a fairly tight group, of course there are different promoters, teams, individuals spread across Cities, States and Countries but for the most part our passion brings us together. One thing that is my absolute pet peeve is individuals who try to take advantage of enthusiasts, it is even worse when it's somebody in the community.

A local individual who is publicly known in the car scene in Quebec through builds and events was called out on a reputable forum for selling fake parts. Now the issue isn't the fact that the parts are fake but everyone was led to believe the parts were genuine based on conversations and the listing itself. Personally I know the vehicle and parts in question and have known they were replicas for years but for some individuals who don't do their research on spotting replicas taking the word of someone who's supposedly credible in the scene should be a good enough reason to believe them.

I for one instance believe that buyers of parts should always due their diligence but cannot fathom why somebody would jeopardize their credibility by trying to take advantage of another enthusiast publicly. The community response was outrageous today with a lot of back peddling from the seller and so forth. Another 'WOW' moment was when the seller actually contemplated taking some kind of action against the forum owner for allowing the post which called him out on his fraudulent sale.

I've seen these types of individuals randomly over the years on some of the largest forums as well as sellers on eBay in the past. I feel that eventually everybody shows their true colors and if you truly love the automotive scene and continue to try and scam it's community it affects all of us.

I would like to give free advice to companies, shops, organizers evaluating sponsorships, in every city there's a always a group of key people who have been in the automotive community for years, just in my contact list alone I can think of a bunch of people in various cities. Don't be afraid to ask for references, also ask for their usernames from forums and take a look to see if they're as legit and dedicated to the scene as you hope they are to represent your products whether on their vehicle or event.

To all the individuals buying parts, you can ask for references as well from other people they've sold to, if that's not available or you're too shy to ask, make sure you due as much research as possible when you inspect the parts for legitimacy.

As to all the promoters out there, locals know who these people are. For the negativity they bring to the scene they should be banned from participating in events. If this was survivor they would have been voted off the island; and that's my two cents.