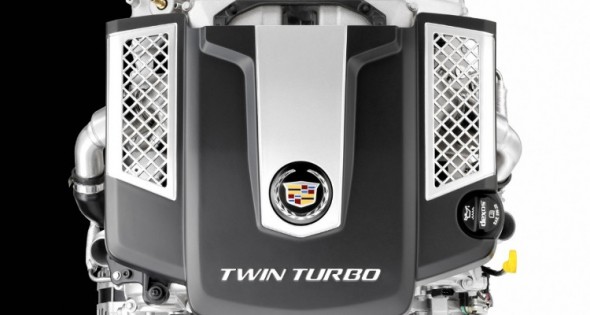 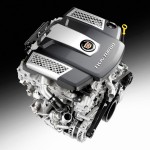 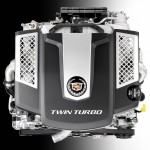 The Cadillac Twin-Turbo V-6 is the most power-dense six-cylinder engine in the midsize luxury segment – a 3.6L with 118 horsepower per liter (88 kW/liter) – and the eight-speed automatic enhances fuel economy and acceleration over a six-speed automatic.

A pair of smaller turbochargers and an efficient charge air cooler help provide more immediate power delivery. Additionally, approximately 90 percent of the 3.6L Twin-Turbo’s peak torque is available from 2,500 rpm to 5,500 rpm, giving the engine a broad torque curve that customers will feel as strong, willing power in almost all driving conditions, such as accelerating or overtaking traffic on the highway.

Those features help the new CTS sedan reach 60 mph from a standstill in an estimated 4.6 seconds and achieve an estimated top speed of 170 mph (274 kph).

The new Cadillac Twin-Turbo will expand the performance envelope of the upcoming 2014 CTS midsize luxury sedan, launching this fall in the United States. The engine will also will be offered in the 2014 XTS large luxury sedan this fall.

The 2014 CTS sedan will also feature the naturally aspirated 3.6L V-6 rated at 321 horsepower, as well as a 2.0L turbocharged engine rated at an estimated 272 horsepower.

Because the Cadillac Twin-Turbo is based on the same architecture as the existing naturally aspirated 3.6L V-6, it benefits from many proven technologies including dual-overhead camshafts, variable valve timing and direct injection. Key features also include:
■A durable forged steel crankshaft that contributes to greater high-rpm smoothness
■A friction-reducing polymer coating on the piston skirts, as well as fully floating wrist pins that help reduce friction
■Pressure-actuated oil squirters drench the underside of each piston and the surrounding cylinder wall with an extra layer of cooling, friction-reducing oil
■A cast aluminum oil pan is stiffer to improve powertrain rigidity and reduce vehicle vibration. It bolts to the transmission bell housing as well as the engine block, eliminating points of vibration.

The cylinder block casting is unique to the turbocharged engine with cast-in provisions for turbocharger coolant and oil connections, as well as positive crankcase ventilation passages. It uses nodular iron main bearing caps for greater strength to manage the higher cylinder pressures that come with turbocharging.

The cylinder heads are also unique to the Cadillac Twin-Turbo. They feature a high-tumble intake port design that enhances the motion of the air charge for a more-efficient burn when it is mixed with the direct-injected fuel and ignited in the combustion chamber. The topology of the pistons, which feature centrally located dishes to direct the fuel spray from the injectors, is an integral design element of the chamber design, as the piston heads become part of the combustion chamber with direct injection.

“The high-tumble heads were developed with advanced modeling programs that helped us determine the optimal design in less time and with less trial and error,” said Richard Bartlett, assistant chief engineer for the 3.6L engine. “Literally hundreds of simulations were performed to optimize the port flow, injector spray angle and pattern, and piston topology to produce a highly efficient yet powerful combustion chamber.”

Large, 38.3-mm intake valves and 30.6-mm sodium-filled exhaust valves enable the engine to process tremendous airflow. In some conditions, the continuously variable valve timing system enables overlap conditions – when the intake and exhaust valves in a combustion chamber are briefly open at the same time – to promote airflow scavenging that helps spool the turbochargers quicker for faster boost production.

Hardened AR20 valve seat material on the exhaust side is used for its temperature robustness, while the heads are sealed to the block with multilayer-steel gaskets designed for the pressure of the turbocharging system.

As with the naturally aspirated 3.6L, the heads feature integral exhaust manifolds, although upper and lower water jackets were added to the heads to provide uniform temperature distribution and optimal heat rejection. On top of the heads, new aluminum cam covers enhance quietness and are designed with greater positive crankcase ventilation volume to support the turbo system.

Another unique feature of the Cadillac Twin-Turbo is its efficient manner of processing the pressurized air charge through the cylinder heads and into the combustion chambers. A single, centrally located throttle body atop the engine controls the air charge from both turbochargers after the temperature is reduced in the intercooler. This efficient design fosters more immediate torque response, for a greater feeling of power on demand, and reduces complexity by eliminating the need for a pair of throttle bodies.

Using a pair of smaller turbochargers rather than a single, larger turbo also helps ensure immediate performance, because smaller turbochargers spool up – achieve boost-producing turbine speed – quicker to generate horsepower-building air pressure that is fed into the engine. The Cadillac Twin-Turbo’s integrated charge air cooling system also contributes to its immediate response, because the compressors blow through very short pipes up to the intercooler.

With no circuitous heat-exchanger tubing, there is essentially no lag with the response of the turbochargers. In fact, airflow routing volume is reduced by 60 percent when compared with a conventional design that features a remotely mounted heat exchanger.

“It is a very short path from the turbos to the throttle body,” said Bartlett. “The compressors draw their air directly from the inlet box and send their pressurized air through the intercooler basically immediately, giving the new CTS a tremendous feeling of power on demand.”

The charge-cooling heat exchangers lower the air charge temperature by more than 130 degrees F (74 C), packing the combustion chambers with cooler, denser air for greater power. The twin-brick configuration of the heat exchangers is similar in design and function to the 6.2L supercharged “LSA” engine used on the current CTS-V Series.

“The LSA engine showed us the efficiencies of mounting the intercooler on top of the engine, especially when it came to packaging and maintaining a short, unobstructed path for the air charge,” said Bartlett. “It’s efficient and effective – and we wanted to build on that experience.”

Unique vacuum-actuated wastegates – one per turbocharger – and electronic vacuum-actuated recirculation valves are used with the 3.6L Twin-Turbo for better management of the engine’s boost pressure and subsequent torque response for smoother, more consistent performance across the rpm band.

A wastegate is used to regulate the boost pressure of the engine. It provides a method to bypass the exhaust flow from the turbo’s turbine wheel, which can be reintroduced into the exhaust stream – via a bypass tube – to maintain optimal turbine speed across the rpm band. Conventional wastegates are pressure-activated, allowing control of the actuator.

The wastegates also work in concert with the recirculation valves to eliminate co-surge from the turbos – a condition that can result in dynamic flow reversal, such as the moment immediately after the throttle closes. This overall system integration contributes to the engine’s smoother, more consistent feeling of performance.

The Cadillac Twin-Turbo is paired with a high-performance, paddle-shift eight-speed automatic transmission that offers efficiency and performance advantages over a six-speed transmission – including 1.5-percent greater fuel economy.

The wide, 6.71 gear spread of the transmission enables the CTS to deliver strong performance at all rpm levels, while achieving good fuel economy on the highway. A “tall,” 0.69-ratio eighth-gear also helps maintain a low engine speed of approximately 1,800 rpm at 70 mph – about 200 rpm lower than a six-speed – which not only enhances efficiency but contributes to a quieter driving experience.

Complete electronic control of the transmission enables it to select the best gear for the driving conditions, allowing the transmission to “skip” one or more gears, if appropriate, when up-shifting or down-shifting. In manual mode, torque converter lockup is used in gears two through eight to balance performance and efficiency, while preserving the maximum torque multiplication in first gear for optimal launch performance

The CTS development team tailored the transmission for the high torque output of Cadillac 3.6L Twin-Turbo, which included stronger gear sets and a greater number of clutch plates. The team also wove in driver-selectable performance features enable the transmission to hold lower gears during certain performance-driving situations, for a more connected and responsive driving experience with the new turbocharged engine.

Cadillac has been a leading luxury auto brand since 1902. In recent years, Cadillac has engineered a historic renaissance led by artful engineering and advanced technology. More information on Cadillac can be found at media.cadillac.com.