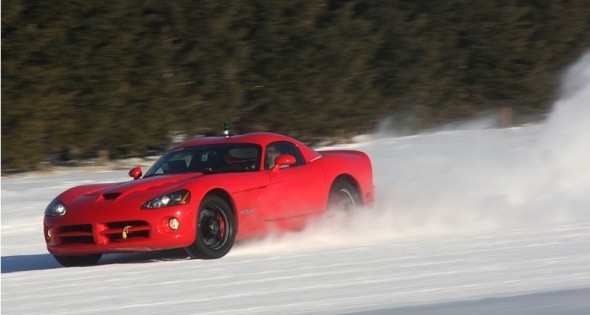 The Chrysler Group’s Street and Racing Technology (SRT) team made history on Sept. 14, 2011, at the famed Nürburgring Nordschleife as their ultimate, street-legal, track-ready car – the Dodge Viper SRT10® ACR – recaptured the production car lap record with a 7:12.13 elapsed time.

With no 2011 model-year Dodge Viper cars being produced, SRT joined forces with the Viper Club of America and the ViperExchange by Tomball Dodge team from Tomball, Texas, which supplied two brand-new 2010 Dodge Viper ACR's off their showroom floor for the record-setting effort.

“We’re extremely proud to set the lap record for a second time at the famed Nürburgring Nordschleife,” said Ralph Gilles, President and CEO – SRT Brand and Motorsports, Chrysler Group LLC. “Our team returned to Germany knowing we’d left some time on the track when we set our first lap record, so this effort shows the incredible depth and capability the Viper ACR has by running a full 10 seconds faster than we did in 2008.”

ViperExchange team owner and longtime Viper enthusiast Ben Keating, also was instrumental in securing veteran GT driver Dominik Farnbacher to drive the Viper ACR to the new record lap. Keating and Farnbacher previously teamed up at the 24 Hours of Daytona in 2011.

The street-legal Viper ACR is factory-equipped and tuned for outstanding track performance with coil-over racing dampers that are adjustable for both damping and ride height. The shocks are two-way factory adjustable without removing the wheels – a timesaver at any track configuration – and they include a large range for compression and rebound adjustment. Aerodynamics are also adjustable via carbon-fiber rear wing with seven-position stanchions and an adjustable front splitter.

SRT’s first official visit to the Nürburgring took place in August 2008 when the newly launched 2008 Dodge Viper ACR came to Germany with driver Tom Coronel and established a new production car lap record time of 7:22.1, a record that stood through much of 2011.

As a result of their original trip to Nürburgring, SRT engineering implemented a few specific improvements to get even more speed out of the record-setting supercar.

For the 2010 model year, the Viper ACR received a shorter fifth gear ratio (changing from 0.74 to 0.80) for improved high-speed acceleration and higher straightaway speeds. This helped achieve higher speeds down the front straightaway of Döttinger Höhe and past the Antonius Bridge on the Nürburgring course. The rear-wing profile and end plates also were redesigned to further optimize the vehicle aerodynamics and improve yaw downforce, which allowed greater speeds through the high speed turns such as Schwedenkreuz. A new short-throw shifter also came in 2010 models for enhanced driver control and quicker shifts.

The hot-lap testing was spread over two days. On Sept. 12, the track was completely wet at the beginning of the four-hour session. By the final hour, the track was mostly dry but peak performance was limited due to a few remaining damp areas at the Bergwerk corner and Fuchsröhre and Wippermann areas. The best lap of the day was a 7:15.6 at the end of the session. By Sept. 14, a clear weather pattern allowed the track to dry and gave the team good conditions for the Viper ACR’s final lap of 7:12.13.

The aerodynamic package features a carbon fiber “fanged” splitter in front and adjustable carbon-fiber wing with seven-position stanchions that allow up to an amazing 1,000 pounds of downforce at 150 mph. Lightweight forged aluminum wheels, two-piece slotted brake rotors and Michelin Pilot Sport Cup tires round out the ACR package.