What you know about Jordan’s?!?!

So the year was 1997...I was just a young buck in high school and Michael Jordan hysteria was at its highest. I’ll be the first to admit, the one and only reason why I watched the NBA was because of Michael Jordan. At that time, there was absolutely no reason to watch anything else. As we all know, MJ had just won another championship in outstanding fashion, and let’s not forget about the famous “Flu Game” Then in 1998 the movie “He Got Game” starring Denzel Washington and a very young Ray Allen, débuted and I will never forget the part when Denzel laced up these bad boys and I freakin lost it, it was basically one of those “I GOTTA GET ME A PAIR OF THOSE!!” moments.

Unfortunately I was too young to buy a pair myself and by the time I knew that these shoes were on sale, they were already sold out. So now 14 years later...13 when the movie came out (COINCIDENCE?!?!) and thanks to NBA 2K11, I walked into a foot locker and BEHOLD to my surprise I had discovered that these shoes were re-released. Unfortunately I ended up missing the presale for the flints (Blue and Grey) but ended up buying the playoffs and the white and red colorway. Just so you know, it’s not just the 13’s, I love every Jordan shoe, not because of the style but it was all about the history and story behind each pair, especially the Jordan’s that were actually worn by his "Airness".

Now on to the 13’s, these shoes to my surprise were designed after the paws of a panther, suitably so, since other players referred to Jordan as a “Black Cat” and it was the only Jordan shoe up until this day that features a hologram. A hologram?! Really?! Holograms belong on cards not on shoes...well thank God the designer knew what he was doing, because not only is this shoe considered to be one of the best designed Jordan pair (I know the 11’s are pretty sweet), but the 13’s are maaaad comfortable. This is one of the only shoes that I did not have to break in.

If you’re a sneaker freak like me, you already know that they’re re-releasing Jordan’s in a big way. That includes the Ray Allen 13’s(Green and White),the 11’s the 14’s all this year and the 12’s next year...HOLY CRAP!!! Can you say, “Broke as a joke!” Yup I’m in Canada and if I end up buying these shoes as they come out, I’m looking at about $240.00 * 4 pairs which comes up to $960.00!!! Daaaaaaamn!!! Better start saving up.
So here are my final thoughts, if you can get a pair of 13’s not only are you a Jordan fan but you my friend are a connoisseur and I used to love, I mean adore the Jordan Flints (Blue and Grey) but then I saw Ronnie from the Jersey Shore rock those during an interview and I immediately crossed them of my list...SHIT!!! That was my favourite colorway too...F---G Ronnie!!!

If you have any questions or comments, feel free to send me an email or if you need any help in finding a Jordan Shoe, I’ll be happy to send you some links that will definitely help you out.

P.S.
*The pic in this article are the pairs that I own...I know I know they’re dirty, but what the hell, I’m not gonna buy a pair of J’s just so I can look at them!!! 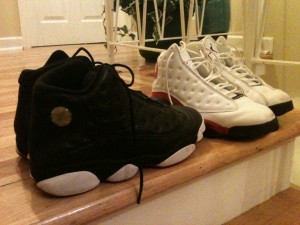