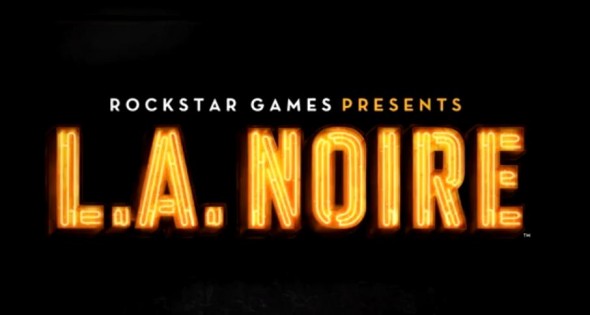 It was a dark and stormy night, it’s just past 3am in the city, a chill wind is in the air and the only people that are awake are the bus and cab drivers, bringing home the weary and the drunk. Yet in the faint distance a single car can be seen as it pulls into a desolate park. The driver’s side door swings open and a tall figure slowly emerges. The figure walks towards the passenger side door, opens it, and jostle’s a female passenger to the ground.

Standing above the horrified woman; armed with a steel pipe, the tall figure begins to bludgeon her to death...WELCOME TO LA NOIRE. With 1940’s Los Angeles serving as its backdrop, the folks at Team Bondi were able to put together a masterpiece of a video game., I am excited to see if I will love it as much as I love the Klik her games. In a land where lap tops, cell phones, and GPS’s all have been replaced with nothing more than the basics of necessities. Where a police officer’s best tools is a pad, a pencil, a sharp tongue and a quick wit. As for warrants...well you’ve got your fists to do the talking for you. Enter Cole Phelps a hardened war vet turned cop, where the criminal’s worst nightmare is an investigator that doesn’t bend under pressure.

I had no idea what to expect from La Noire, I figured that it was just another “Grand Theft Auto”...I was wrong. The first thing you’ll notice when playing LA Noire is the level of detail that went into each character’s face. Using a “performance scanning system” which utilizes 32 high definition cameras, the developers were able to not only scan the actors face into the game but also recreate the facial expressions that they were making as well. You’re probably thinking motion capture; tiny dots on someone’s face and you’re also probably thinking that stuff’s been done before...well sir you are wrong. The facial expressions are nothing like I’ve ever seen before; the level of detail is astounding. I can’t glorify this enough. I encourage you to watch the trailers, go on YouTube and check out some interrogation scenes and you’ll see what I mean, absolutely phenomenal.

Now, you might be wondering, why so much detail in the facial expressions? Well, there’s a reason for that. The main theme of the game is being able to successfully question suspects and in some cases having to verbally breakdown the suspect only to be rewarded with that oh so sweet confession. To do so, you must decide if the suspect is telling the truth, a lie or if you know the suspect is lying but lack evidence, you can select “doubt”. By watching the suspects face and looking for hints to help you decide. From obvious nervous reactions to subtle eyeball movement, whichever you choose, you’re rewarded with a great acting scene that will rival some movies and a possible clue or just the feeling of disappointment that you failed to outsmart the bad guy sitting across from you. Oh I yelled at the screen many times “yeah!...Lie your way out of this dirt bag!” 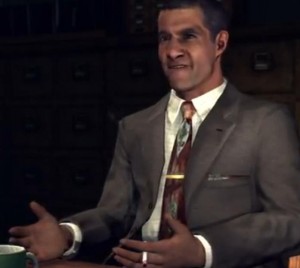 AHH AHH AAAAHH Temper, temper mr.suspect, everything you say, can and will be used against you in a court of law.

As for the core game controls, I have to admit, it’s pretty good. I definitely enjoyed the “free runner-esque” style of gameplay where chasing a suspect is smooth and uninhibited from having to push needless button commands to hurdle over obstacles. Even climbing up fire escapes and apartment building stairs is seamless. Just hold up on the controller and Cole Phelps does the rest. Overall you really do feel that you are in control and you’ll rarely get frustrated over them but rather your own inability to run or drive in a straight line.

Finally, if you’re an achievement fiend like me you’ll discover that obtaining the 1000 Achievement points (Xbox 360) or Trophy’s (PS3) is pretty easy but challenging enough that it doesn’t feel like a chore. On that note...FU-K YOU GTA 4!!!....300 pigeons scattered around the city!!! What’s messed up is that I used the Brady Guide but somewhere during my gameplay session I didn’t save my progress. So when I killed the last pigeon it said 298...whoever came up with that achievement can kiss my a$$! I wasted like a month of my life!!....*ahem...sorry.

My final verdict:
BUY LA NOIRE...The story is absolutely captivating and I was actually looking forward to interviewing characters in the game rather than driving. The chase segments are fun and exciting. It’s a great game to show-off to your friends, it provides a refreshing change of pace from GTA. There are a few DLC’s that are available right now and I can only imagine that there will be more to come. You can replay missions once you’ve beaten the game; there are even free-play modes in case you’re wondering. What I like to do, is let my friends play the game and see who the better judge of character is, and for some reason, women are pretty good at the game...almost too good....dammit I'm gonna start wearing sunglasses whenever I talk to my girlfriend from now on HA-HA!

Until next time, Stay Intuned,
John T.
P.S.
Thank you everyone for your patience, I apologize for the delay in the getting this article up.