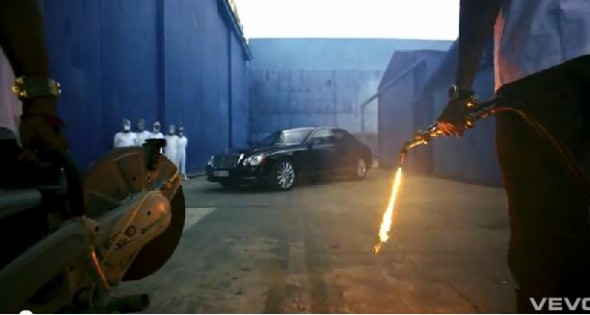 It was only a matter of time...Being a huge fan of Rap music, you can imagine how excited I was to find out that my two favorite artists were joining forces. From when I started listening to Rap, the main duos that I knew of were;

and now, Jay-Z and Kanye...damn, now you know that something nice is gonna come out of that relationship. Jay-Z's flow to Kanye's beats, its bound to be a home run right? Well your right, up until I saw what they did to that poor poor Maybach. What did that car do to deserve that? I know, I Know, some may argue art, others may say that its brilliant, ballsy or dare I say, Swag (*cringe)

Or maybe like me, your thinking...WTF?!?! "Oh God no", "Jay what are you doing with that blow torch!", "Ye put down that Saw!" The car never stood a chance. Personally, I highly doubt that the "May" was donated. I would definitely question the very notion that Mercedes was approached with the proposal that their car would turn out the way it did at the end of the day, and they full out agreed to it?! Well then again, I'm sure all Jay-Z had to do is show up and they'd give him whatever he wanted. In either case, I only ask one question...Why?!?!...Well I guess there is no better marketing idea out there, than to destroy something that the average person may never be able to afford...so Kudos to you Mr.Marketing genius, $300,000 plus dollars well spent.

At the end of the video, its displayed that the car would be auctioned off to help with the current drought crisis in Africa...well then, that makes it all better. Wait!...what?! Are you kidding me?! If your a car guy and you understand anything about physics or even the basic notion of what keeps a car together, you know that the roof, unless made to anticipate the possibility of it being ripped off in such a fashion, keeps the car rigid and safe. Unless proper reinforcement was made, that car is a rolling death trap. Ahh the Irony. To the future Winner of the Auction, you're better off donating that cash straight to Africa yourself and immortalize yourself in the form of a statue or have a hospital named after you.

Well, I dislike finishing a blog on a sour note, so on the positive side of things, the album is awesome, the video although upsetting was quite entertaining, the beat is fantastic and now I need to find a glove that can throw sparks! Just to be fair if I was a millionaire I'd most likely do the same thing. Except instead of a Maybach, I'd purchase $100,000.00 worth of Booze, get a few DJ's from around the world, invite every FHM, Maxim, Victoria Secret, and Import Model I can find to a rented mansion and hold the world's sexiest twister competition!! The winner takes home whatever booze is left and a cash prize of $25,000.00. The remaining cash will then be spent on inviting and flying in all my friends and followers from Twitter and Facebook...Now that's what I call money well spent.

Until next time, stay Intuned for more to come and remember...SAVE YO MONEY!!!