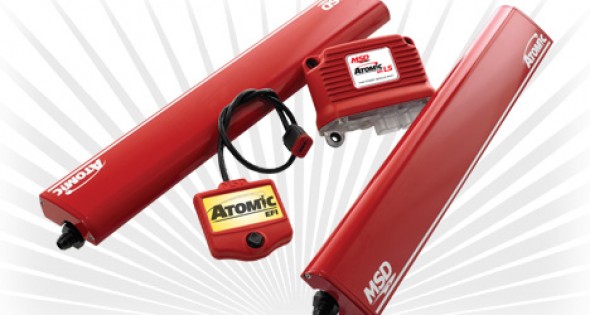 MSD Performance is driving innovation again with its next generation of Atomic EFI - the all new Atomic LS platform. Where last year's Atomic TBI consolidated electronics and sensors into the throttle body itself, the Atomic LS platform incorporates the electronics into the fuel rails. There's no bulky ECU or wiring harness to mount and therefore no mess of wires to route around the engine. -The Atomic LS wiredless design mounts simply and cleanly on the engine, greatly improving the overall aesthetics under the hood.

MSD Atomic EFI systems were designed with two major goals; to simplify EFI and deliver better overall performance to your engine. Simplicity is achieved through wiredless technology to ease installation plus the Atomic is simple to program with no PC required! Performance is delivered through advanced control of the fuel and ignition, just as you'd expect from MSD.

What makes the Atomic LS truly innovative is the integration of the ECU into the fuel rail assemblies. With the ECU integral on the engine, there is no need to run over 100 wires around the engine and back to an external ECU! The electronic fuel rails each have only the connectors required for each bank of the engine. You're spared excessive wiring to save time, ease installation and improve the aesthetics of your engine.

• Integrated fuel rails and ECU significantly reduces the amount of wire
• Improves the aesthetics of the engine bay with less wires and NO ECU to mount
• NO PC required, each system is supplied with a handheld monitor
• Self-learning technology eases the setup and initial tuning
• Compatible with return or returnless fuel systems
• Supports up to 1000 horsepower, nitrous and boosted applications
• Complete kits for specific LS engines

Two master kits are being launched, PN 2950 for LS2/LS3 engines, and PN 2960 for the LS7. These kits are designed for factory style intake manifolds and injectors. There are two supporting installation kits offered to cover the LS1/LS6, PN 2955, and for the LQ9 truck engine, PN 2956. More Atomic LS components and kits will be coming throughout 2013.

Founded in 1970, MSD Performance (long known as MSD Ignition) has been the most recognized name in performance ignition systems for more than 40 years. Now, MSD Performance is driving innovation and leading the industry in vehicle performance integration systems for street and racing use. The company designs, develops, tests and manufactures its entire line of ignition controls, coils, electronic fuel injection systems, timing accessories and spark plug wires and accessories from its headquarters in El Paso, Texas. 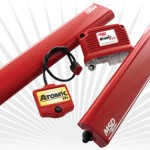