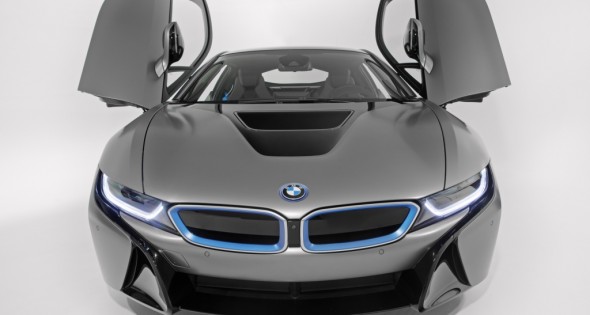 The 2014 BMW i8 Concours d’Elegance Edition will feature BMW Individual Frozen Grey Metallic exterior paint. The unique interior will boast Dalbergia Brown leather upholstery, which is tanned using dye derived from plant extracts. The upholstery is accented with stitching in BMW i Blue. The Pure Impulse Tera World interior includes other trim accents in BMW i Blue, including the seat belts, as well as having “BMW i8” embossed into the front headrests. A number of US firsts will be included with this special edition including laser headlights, pending government approval, a BMW i8 Display key as well as the first BMW Charging Station, professional edition.

Other touches will further mark this BMW i8 as truly one-of-a-kind. The words “Pebble Beach Concours d’Elegance Edition” will be laser etched into the door sills and a plaque on the rear parcel shelf contains the signatures of senior BMW executives who played key roles in the development of the i8, including:
•Ian Robertson – BMW Group Board Member – BMW Sales and Marketing
•Herbert Diess – BMW Group Board Member – Development
•Adrian von Hooydonk – Head of Design – BMW Group
•Benoit Jacob – Head of Design – BMW i
•Ulrich Kranz– Head of BMW i
•Carsten Breitfeld – Project Manager – BMW i8

The car will be sold at the Pebble Beach Auctions presented by Gooding & Company on Saturday, August 16 at the Pebble Beach Special Events area. It is schedule to cross the auction block at approximately 8:45pm PDT. The sale will include a complete set of the Louis Vuitton luggage, tailored exclusively for the BMW i8.

For information about bidding or to watch a live stream of the auction, please visit www.goodingco.com.

The BMW i8 is arguably the most innovative sports car on the road today. The plug-in hybrid all-wheel drive powertrain combines an electric motor to drive the front wheels and a powerful and efficient 1.5-liter BMW TwinPower Turbo three-cylinder gasoline engine driving the rear wheels. The BMW i8 is capable of driving on pure electric power at speeds up to 75 mph for approximately 20 miles, producing zero tailpipe emissions. When the gasoline engine joins forces with the electric motor, together they are capacity of propelling the i8 for 0-60 mph in 4.2 seconds and to a top speed of 155 miles per hour. Thanks in part to its passenger cell constructed out of lightweight carbon fiber reinforced plastic, The BMW i8 will deliver fuel efficiency normally associated with the stingiest subcompact. The lithium-ion battery pack that powers the electric motor can be charged from any 240-volt level 2 charging station as well as a conventional 110-volt outlet.

The BMW i8 is the world’s first series-produced vehicle to be made available with innovative laser headlights as an option. These generate a pure-white, extremely bright light that is pleasant to the eye by carefully converting the beams emitted by tiny laser diodes using a fluorescent phosphorous material inside the headlight. The laser diodes are ten times smaller than conventional light-emitting diodes, helping to save space in the headlight unit and also to reduce weight. The BMW i8 Concours d’Elegance Edition will be the first car in the US to have this technology, pending government approval. If necessary these headlights will be retrofit subsequent to delivery. It will also be the first BMW in the US to offer an innovative display key which features an integrated LCD touch screen.

The 2014 BMW i8 Concours d’Elegance Edition will not only offer the winning bidder the chance to own one of the first BMW i8s in the US, but also to own a truly one-of-a-kind example of the world’s most innovative sports car. 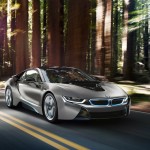 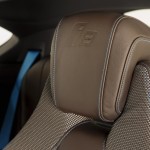 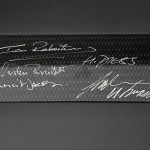 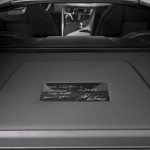 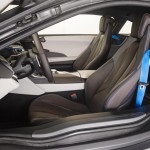 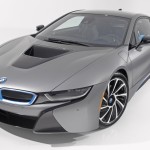 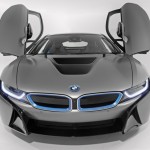 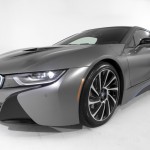 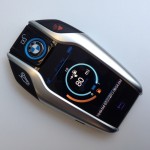