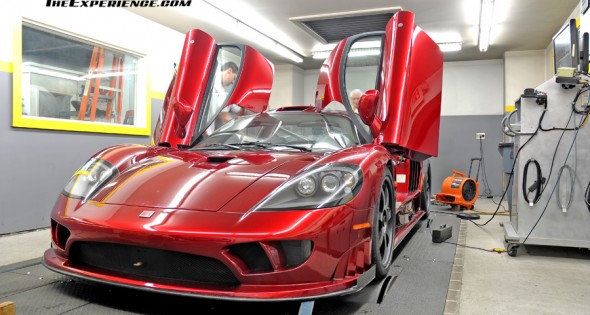 Unfortunately we cannot release too much info regarding exactly what was done to this savage machine. But we CAN say that this S7's bite is as big as its bark! Aside from it's wild and exotic appearance, this rare twin turbo S7 packs a punch to back up its aggressive looks. In conjunction with RBS Competition, the car came to our shop with some serious engine problems, but with the team work and help of Chris Sheffer (owner of RBS Competition) and John Martin, this Saleen was brought back to life. After the engine was rebuilt, we ran it on our engine dyno where with team effort, we were able to see some really impressive horsepower numbers. Upon finishing the engine and re-assembling the car itself, it was then strapped down on our chassis dyno to make sure that there are no issues before bringing the car back to its lucky owner in Canada. This video shows the final outcome as we ran it on the chassis dyno since it was pouring rain outside and who in their right mind will take a $600,000 car with such power out onto the wet roads. The pulls on the dyno were not pulls to measure horsepower but instead to make sure the car performs with no problems under heavy acceleration.