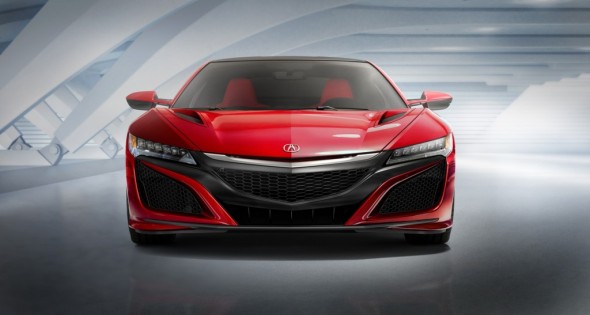 Rebirth of an Icon: Next Generation Acura NSX Unveiled

Twenty-five years after the debut of the original, paradigm-shifting NSX supercar, Acura revealed the production version of its highly anticipated successor—the next-generation Acura NSX, developed and produced in the U.S.—to the world's auto media at the 2015 North American International Auto Show today. The production model, in a scintillating NSX Red finish, took the stage with a growl from its twin-turbocharged engine.

The next generation NSX showcases the production styling, design and specifications of Acura's mid-engine sports hybrid supercar, and Acura announced key details of the all-new vehicle's design and performance. The company will begin accepting custom orders for the new NSX starting in the summer, with customer deliveries expected later in the year.

Specifically created to bring a "new sports experience" to the supercar segment, the NSX challenges conventional beliefs about supercars — much as the first generation did a quarter century ago. The approach is realized through an all-new power unit—a twin-turbocharged 75-degree DOHC V6 engine with a 9-speed dual clutch transmission (DCT) and three-electric motor Sport Hybrid system—integrated with an ultra-rigid and lightweight multi-material body with world's-first material applications and manufacturing processes. Developed under the concept of a "human-centered supercar,” a car that puts the driver first in every aspect of its design, the next-generation NSX will leverage its state-of-the-art hybrid supercar power unit, body and chassis to deliver exceptionally intuitive and immediate response to driver inputs.

"Our commitment was to create an all-new NSX that is true to the heritage of NSX—a supercar that delivers a new driving experience, one where every part of the vehicle is respectful of the smartest part of the car, the driver," said Mike Accavitti, senior vice president and general manager of the Acura division. "The soul of a car is the emotional connection it makes with the driver. With the NSX, that connection will be intense and immediate."

As the pinnacle representation of Acura performance and prestige, the NSX was introduced at the auto show under the theme of "Precision Crafted Performance." The theme was the original tagline for the Acura brand, a guiding force behind the development of the original NSX and a critical component of its launch.

The development of next-generation NSX, driven by precision crafted performance, has resulted in a clean-sheet design, which involved nearly three years of intensive development effort by a global design and engineering team led by engineers at the company's development center in Raymond, Ohio.

"The NSX reflects Acura's American roots and makes a powerful statement about the strong role being played by our North American operations in envisioning and building the future of Acura," said Erik Berkman, executive vice president of the Acura Business Planning Office.

"Our global team embraced the challenge to create a new sports car experience, leveraging new technology to deliver incredibly vivid performance in a vehicle that responds intuitively and immediately to the will of the driver," said Ted Klaus, chief engineer and global development leader of the new NSX. "The NSX delivers pinnacle supercar performance, with zero-delay acceleration and exhilarating, confidence-inspiring driving dynamics."

The NSX body features classic low and wide proportions married to modern and alluring surfacing, an aggressive front design, and tail lights that pays homage to the original NSX. The signature side intake and floating C-pillar collects air to feed the mid-mounted engine and directs airflow over the rear deck to increase downforce. To accommodate the new longitudinally mounted twin-turbo V6 and 9-speed DCT, the production vehicle was lengthened (+3 inches) and widened (+1 inch) with a slightly more cab-forward package, compared with the proportions of the NSX Concept shown in 2012.

Every element of the exterior body design has been carefully fashioned for total airflow management for both stability-enhancing downforce and vehicle systems cooling. The NSX has undergone extensive testing at the company's state-of-the-art wind tunnel in Raymond, Ohio, leading to a number of significant changes from concept to final body design, including modified hood vents, new front fender vents, modified side air intakes, and an optimized deck spoiler. 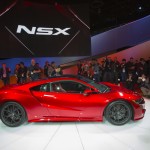 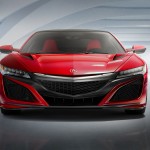 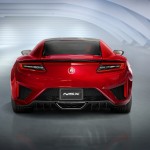 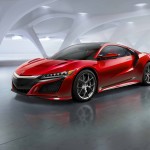 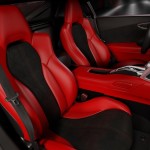 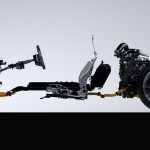 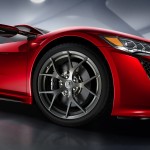 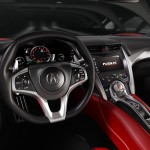