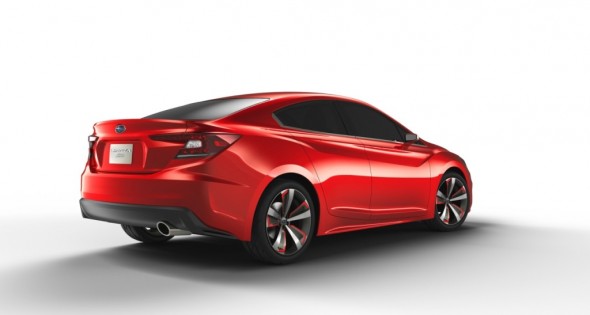 The all-new Impreza will be the first example of Subaru's next-generation vehicles using a new modular platform. The design is sportier and less angular than the previous generation Impreza, but with a powerful stance expressing Subaru’s new Dynamic x Solid design language. The new design direction hints at not only the new Impreza design, but of Subaru’s future models.

Main Features of Impreza Sedan Concept
The front, sides, and rear of the car are seamlessly joined to create a solid and muscular body that is inherent of Subaru design. Aerodynamic performance is achieved by blending functionality and styling, incorporating a integrated rear spoiler and functional from valance. Well-placed character lines greatly enhance the dynamics of the compact sedan. The Ruby Red Metallic color with glossy black accents represents a sporty and energetic impression. •Front •The Subaru family resemblance is immediately recognizable with the hexagonal grille, menacing hawk-eye headlights and aircraft inspired wing.

•Sides •The flared fenders launch the sharp character line that run the length of the car. A second, upswept character line along the lower door panels adds energy to the overall design theme. The 19” wheels are flush with the wheel arches, further establishing the car’s wide stance and the fender flares express the Subaru Symmetrical All-Wheel Drive. These are key features of the concept’s dynamic new design.

•Rear •The sharp character line flows seamlessly into the rear tail lamps from both sides and intersect at the rear. The sleek new trunk lid enhances the sporty impression on the sedan. The rear taillights share the same styling as the headlights with a wide and low illumination. 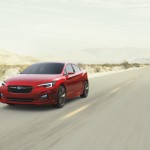 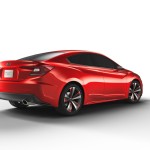