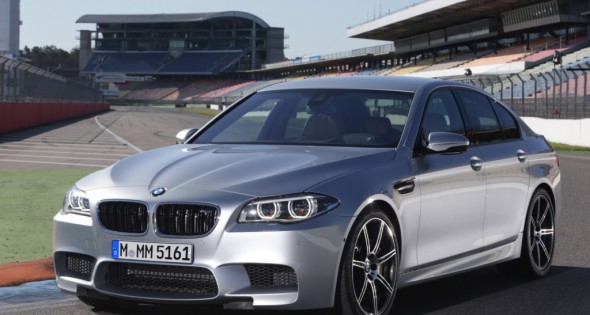 For five generations, the BMW M5 has served as the reference standard in the special business of ultra-high-performance sedans. In each generation since the mid-Eighties, the M5 has joined race-bred chassis components and Olympic levels of power with linear control which can only be developed through years of laps around the legendary Nürburgring Nordschleife in the Eiffel Mountains. Now, paralleling the launch of the 2014 BMW 5 Series Sedan and 5 Series Gran Turismo, BMW M’s hot-rod sedan receives an exciting evolutionary impulse.

Subtle styling updates, new color choices, enhancements to interior and lighting, and a new Competition Package with 575 horsepower (preliminary) are the key highlights of the 2014 M5 Sedan update.

The essential BMW M5 is driven by a 4.4-liter V-8 engine with patented M TwinPower Turbo technology and a peak output of 560 hp in standard form. This power is managed through the standard 7-speed M Dual-Clutch Transmission (M-DCT) or optional 6-speed manual transmission (North America only), Active M Differential at the rear axle, and aluminum-intensive suspension, all of which are precisely tuned to perfect harmony by BMW M’s 41 years of race-bred experience.

There are sport sedans, and then there is the BMW M5. For more than a quarter-century, the M5 has been the four-door sedan which provides levels of performance previously accessible only to super-sports cars. Perhaps this claim was best proven in reality when a production-based, second-generation M5 Sedan won the IMSA Bridgestone Supercar Championship not just once in 1994, but again in 1995. It was, of course, the only 4-door car in the entire field of racers.

To celebrate the M5’s competitive driving spirit, BMW M GmbH will offer the new Competition Package as an option for the M5 and its M6 siblings starting with the 2014 model year. The Competition Package specifically distills handling properties under the principle applied to all BMW M automobiles: fine-tune the suspension to match the performance of the engine, and achieve responsiveness that makes the car precise and controllable in all driving situations.

The Competition Package boosts output by 15 hp / 11 kW to 575 hp / 423 kW (preliminary) in the high-revving V-8 engine with M TwinPower turbo technology that powers the BMW M5, BMW M6 Coupe, BMW M6 Convertible and BMW M6 Gran Coupe models. At the same time, the developers at BMW M have extensively tuned the chassis set-up. Along with new coil springs and damper calibrations, anti-sway bars have also been stiffened. For the BMW M5, these adjustments have resulted in a lowering of the car by around 10 millimeters, which lowers the center of gravity (CG) and roll center. The potential inherent in the rear axle design – based on the race-derived principle of the rear axle subframe being rigidly bolted to the body – and the even more precisely calibrated bushings for the front axle are exploited with the Competition Package.

0.1 seconds have been shaved from the standstill to 100 km/h (0-62 mph) sprint time and 0.2 seconds are saved when accelerating from zero to 200 km/h (0-124 mph). Cornering dynamics and flexibility are also enhanced – something noticeable in everyday driving but best experienced on the race track. In particular in conjunction with the optional M Carbon Ceramic Brake system, also available on the M5 for 2014, all the driving dynamics attributes associated with BMW M automobiles are experienced at the highest level.

The Active M Differential on the final drive – standard on all M5 and M6 models – receives a unique tune when the Competition Package is specified, resulting in further-improved traction. The new rack-and-pinion steering with the M-specific Servotronic variable assist function, moreover, has more-direct programming to enable firm and secure contact with the road while further increasing the agility of the vehicle during cornering.

Beyond these enhancements, the M chassis control system has been adapted to the Competition Package suspension profile. With the Competition Package, the M Dynamic Mode (MDM) of DSC (Dynamic Stability Control) is re-mapped for even sportier handling characteristics and higher thresholds of intervention. The Competition Package additionally includes unique 20-inch M light-alloy wheels along with a sport exhaust system featuring M quad tailpipes finished in Black Chrome that lend an unmistakable look and the sound to the car.

A striking element in the appearance of every BMW is the “kidney grille”, which now features the M5 model designation and whose slats cite the double-spoke design of the M light-alloy wheels. In addition to standard Xenon Adaptive headlights, there is now the option of Adaptive LED Headlights which emit a particularly bright white light generated by a pair of LED units situated horizontally in the middle of each light ring. A standard feature on the BMW M5 are the new-design 5 Series tail lights with strikingly thin LED light strips that generate a high contrast and add to the unmistakable night-time look.

The hallmark M feeling is also conveyed by the M leather steering wheel, whose new design likewise takes visual cues from the double-spoke wheels. The interior of the sedan has also gained an increase in volume of the storage compartment under the armrest in the center console area. The Central Display of the standard-fitted iDrive4.2 Navigation system now features chrome trim on the sides. The iDrive4.2 controller now features a touchpad surface allowing, for example, characters to be entered when programming a destination for the Navigation system.

As of July, BMW Individual will be offering a range of new exterior colors for the BMW M5 including Pyrite Brown Metallic, Frozen Blue Metallic, and further BMW Individual Frozen paintwork finishes, as well as exclusive leather shades (Cashmere Beige and Nutmeg).

The further extended range of features from BMW ConnectedDrive also ensures that the 2014 BMW M5 is in pole position when it comes to intelligent connectivity. Innovative driver assistance systems and mobility services optimize safety and comfort while driving as well as the use of infotainment programmers. BMW Apps is now standard on all 5 Series models for 2014. 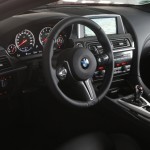 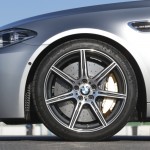 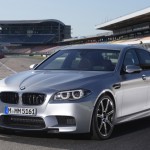 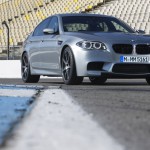 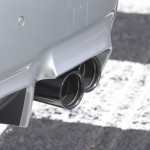