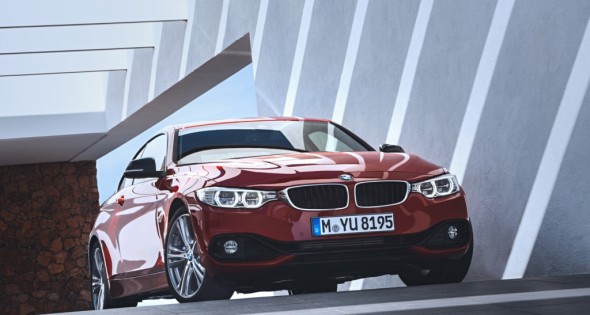 The new BMW 4 Series Coupe will be offered as both a 428i, featuring BMW’s award winning TwinPower Turbo 2.0-liter 4-cylinder and as a 435i with the multi-award winning Twin Power Turbo 3.0-liter inline six. Both will be available with a standard 8-speed sport automatic or six-speed manual transmission. Both will also be offered with a choice of rearwheel drive or with optional xDrive, BMW’s intelligent all-wheel drive system. The 2014 BMW 428i Coupe will have a base MSRP of $41,425, and the 2014 BMW 435i Coupe will have a starting price of $46,925. Both prices include destination and handling. The 2014 428i xDrive Coupe and 435i xDrive will start from $43,425 and 48,925 respectively, again inclusive of destination and handling. All four variants of the BMW 4 Series Coupe will arrive in US showrooms late this summer.

The new BMW 4 Series Coupe is visibly larger in width and wheelbase than the outgoing BMW 3 Series Coupe, and its stretched silhouette sits considerably lower to the road. This, together with its BMW-typical short overhangs, long hood and set-back passenger compartment with flowing roofline, give the BMW 4 Series Coupe a visual balance. The car’s striking front end – with its characteristic BMW design features, such as the double kidney grille, four round headlights and a large air intake in the front apron – is keen to display its family ties with the BMW 3 Series. New elements of the BMW 4 Series Coupe are the Air Breathers, which are positioned rearwards of the front wheel arches to reduce drag. The Coupe’s muscular wheel arches and wide track give an aggressive stance, with its prominent horizontal lines.

The interior of the BMW 4 Series Coupe presents a combination of sporty allure and exclusivity. All the controls central to driving are arranged ergonomically around the driver ensuring comfortable access to all functions. In the rear compartment, contoured seats continue the sporty theme of the BMW 4 Series Coupe. Recessed head restraints and broad, continuously molded side supports give the rear bench the appearance of two individual seats. High-grade material combinations and finish quality accentuate the premium feel of the new BMW 4 Series Coupe. Customers can choose the Sport or Luxury Lines as alternatives to standard specification. M Sport is another alternative. All three allow visible individualization of the car’s exterior and interior appearance. Sharp driving dynamics befitting The Ultimate driving Machine The defining characteristics of the new BMW 4 Series Coupe are its driving dynamics and aesthetics. As always, BMW engineers have placed special focus on steering accuracy, precision, linear control response, and agility to fortify the new BMW 4 Series Coupe as the latest shape of The Ultimate Driving Machine. Sophisticated chassis technology, near perfect 50:50 weight distribution, fine-tuning in the wind tunnel, and lightweight construction all contribute to meet that goal.

A holistic philosophy. In addition to its sporty driving dynamics, the new BMW 4 Series Coupe offers outstanding fuel efficiency. This is a result of the BMW EfficientDynamics development strategy, which can be found in almost every aspect of the new model. The car’s lightweight construction and aerodynamic features – headlined by the groundbreaking Air Curtains and Air Breathers – also help to maximize efficiency. At its core, the new BMW 4 Series Coupe has been engineered for performance excellence, while other features including Auto Start-Stop and on-demand operation of ancillary units help lower fuel consumption and emissions as well. Use of ECO PRO mode gives the potential to cut fuel use by as much as 20 percent. BMW ConnectedDrive. The new BMW 4 Series Coupe uses a combination of driver assistance systems and mobility services (available as standard or optional under the BMW ConnectedDrive banner) to increase safety, comfort and infotainment usage ease and convenience. Among the
highlights are a new generation of BMW Navigation System, which offers extra capability, sharper graphics and 3D elements for the map display, the full-color BMW Head-Up Display; Driving Assistant Plus, which warns the driver of a potential collision with a pedestrian, the intelligent; glare-free LED High Beam Assistant and the latest iteration of BMW Active Cruise Control with Stop & Go. As far as infotainment is concerned, efficient
interface technology enables the integration of smartphones and numerous Bluetooth office functions. The latter also offers the driver the option of a dictation function with full speech recognition. Each feature has been carefully integrated to minimize the chances for driver distraction while the vehicle is in motion.

Design: Timeless aesthetics blend with individuality and sporty ability.
The launch of the new BMW 4 Series Coupe marks the arrival of the latest generation of BMW’s sporty premium mid-size Coupe. The BMW Concept 4 Series Coupe, which celebrated its world premiere at the NAIAS 2013 in Detroit, previewed the development of BMW’s design language which can now be seen in the production model. Its styling promises a commanding presence on the road, stand-out dynamic ability and unbeatable driving pleasure. The “4” in its title spearheads this new era for the BMW Coupes and emphasizes its even sharper sporty dynamics and increased presence that place the new
BMW 4 Series Coupe a step beyond the already-legendary BMW 3 Series range. Athletic elegance, impeccable proportions. The proportions of the new BMW 4 Series Coupe differ significantly from those of the outgoing BMW 3 Series Coupe. Although only an inch (26 mm) has been added to the car’s length (182.6 in / 4,638 mm), a 2-inch (50-mm) longer wheelbase (110.6 in / 2,810 mm) and a roofline that now runs 0.6 inches (16 mm) lower than before (53.6 in / 1,362 mm) enhance the stretched coupe’s profile. These dimensions combined with the BMW 4 Series Coupe’s characteristically short overhangs, long hood, set-back passenger compartment and flowing roofline to produce a visually balanced silhouette. The athletic appearance of the BMW 4 Series Coupe is particularly emphasized by its 1.7inch (43-mm) increase in the width (71.9 in / 1,825 mm). Notably, the rear wheel arches mark the car’s broadest point, giving a more aggressive stance. As a result, 1.8-inch-(45-mm) wider front track (110.6 in / 1,545 mm) and full 3.1 inches (80 mm) of extra width at the rear axle (62.7 in / 1,593 mm) promise – even at a standstill –further improvements in sporty characteristics for which
BMW is known. Eye-catching front end with prominently sporty contours. Signature BMW front-end design features, such as the double-kidney grille and four round headlights, undoubtedly identify the 4 Series Coupe as a BMW. It is unmistakably the 3 Series’ sibling, although the differences are apparent. The optional eye-catching full-LED headlights, with their hexagonal design, and the slightly forward-slanting BMW kidney grille form a single unit and strengthen the athletic presence of the BMW 4 Series Coupe on the road. Below the headlight line, the BMW 4 Series Coupe features a large air intake in the front apron. On the far left and right-hand edges of the air intakes are the additional small vertical apertures for the Air Curtains. These vents improve the airflow around the outside of the front wheels and help cut fuel consumption at higher speeds. Flowing lines shape the elegantly sporty silhouette.

Its precise lines define the outline of the BMW 4 Series Coupe. The subtly sloping roofline creates a smooth transition into the rear, and accentuates the sporty profile of the flanks. The side window with frameless glass and the signature slim-line BMW Hofmeister kink at the trailing edge of the C-pillar create a dynamic visual tension. Below the windows, the double swage line – made up of two character lines running alongside each other – familiar from the BMW 3 Series along with the door sill line strengthen the body’s wedge shape. The small, shrinking shadow below the swage line above the rear wheel flows directly into the flared rear wing, emphasizing the car’s potential and hallmark BMW rear-wheel drive. Located just rearwards of the BMW 4 Series Coupe’s front wheels are Air Breathers designed to reduce drag around the wheel arches. The Air Breathers and Air Curtains underline the sporty character of the car’s design and provide evidence of the aerodynamics devised by BMW as part of its BMW Efficient Dynamics development strategy. 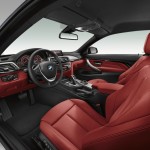 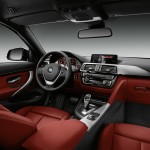 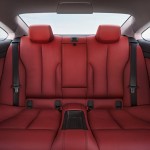 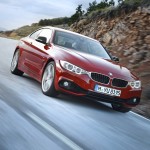 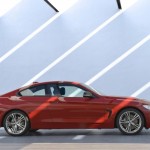 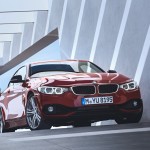 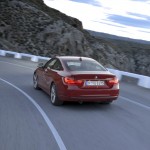 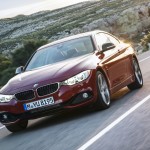