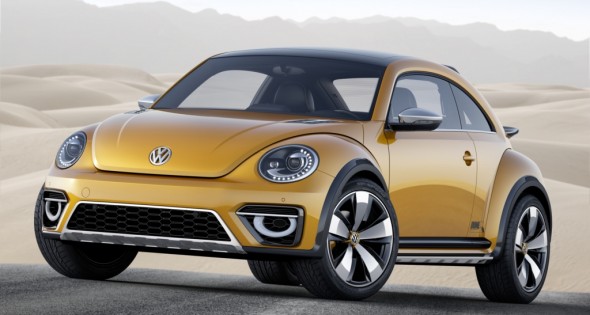 The Beetle is a phenomenon, regardless of where it shows up in the world: People are always happy to see this car, whether it’s the coupe or the Convertible. With the world premiere of the Beetle Dune at the North American International Auto Show in Detroit, Volkswagen is giving the public the chance to see a Beetle with a cool offroad look.

The Dune concept shows the potential for a new production version of the sportiest Beetle ever. The concept is painted in “Arizona”, a yellow-orange metallic, with two-part wheelarch extensions that are offset in black. Like the Cross Golf, these extensions are rugged looking elements with a matte finish. There’s one subtle difference here, though: integrated on top of the main matte parts are 0.06-inch-thick gloss black “blades” that appear to hover above the massive wheel housings, because they do not make direct contact. The wheel housings widen the body by 1.1 inches per side to give a total width of 73.4 inches, an increase of 2.2 inches over a stock Beetle. Overall, the Dune has grown compared with the R-Line model on which it is based. The overall length has increased by 0.5 inches to 168.9 inches and the car is both 2.0 inches higher off the ground and 0.8 inches taller.

In keeping with its wider body, the car’s front and rear tracks are increased by 1.1 inches at the front and rear to 63.3 and 61.9 inches respectively. As a result of the four-square stance and its reduced wheel travel, the 19-inch wheels and 255/45 tires fill out the wheel housings. Visually, the wheels look similar to the18-inch “Twister” design with their five aluminum spokes, black-painted inserts, and polished aluminum rims. The VW logo at the center of each wheel is embedded in a three-dimensional housing that’s painted in the car’s exterior color.

The wheelarch extensions transition into brushed aluminum sill trim panels, between which there’s a chrome-plated underbody skidplate. The top part of the sills are painted in high-gloss black and above them are side trim strips, again finished in a high-gloss black, that are reminiscent of the original Beetle’s running boards. The distinctive Dune logo, meanwhile, is placed in front of the rear fenders. The bottom of the door mirrors are in black, with the rest of the mirror being vapor-coated in aluminum.

Front-end design: The iconic basic design and Bi-Xenon round headlights were preserved, but the front end’s dynamic has been changed by the adoption of a new hood, which has a raised center section flanked by prominent air vents, which have a honeycomb appearance with a central chrome strip.

The front apron, which has also been redesigned, features a large central air intake, a typical design feature of the Volkswagen Cross models. The intake widens towards its bottom edge, highlighting the front end’s sporty look: the black honeycomb screen has a chrome-plated surround that morphs into the underbody protection.

To the left and right of the central air intake and the aluminum underbody protection are the foglight housings: trapezoidal in shape, they have gloss black frames and contain innovative LED foglights. Semi-circular, the LED rings have a matte finish, resulting in a uniform light band. Above the rings are three slender cross ribs and a narrow chrome strip that is 0.4-inches high and serves as an LED turn signal.

Rear section: The Beetle Dune demonstrates that it is possible to reverse the design maxim “form follows function”. This latest iteration of the Beetle would allow someone to escape wintertime by sandboarding in Florence, Oregon or skiing in Aspen, Colorado, depending on your preference. Anywhere skis or snowboards need to be transported, the Dune will happily oblige.

The skis are mounted to the outside of the trunk lid. To do this, the outer parts of the rear spoiler swivel; the skis are then placed in the spoiler, then it is closed to clamp them in place. At the top, the skis slide into a receptacle in the specially developed roof spoiler, where they are secured by an 0.8-inch-wide belt. The roof spoiler is painted in high-gloss black, like the entire surface surrounding the transparent panoramic tilt/slide sunroof. The meticulous attention to detail is also reflected in the skis for the concept car, which are painted in shiny black. The Dune signature and Volkswagen logo are offset in matte black. Even with skis mounted, the trunklid can be opened easily at any time.

The contrasting matte and gloss black theme continues on the rear bumper, with the surfaces around the license plate and the wrap-around extension of the wheelarches being painted in gloss black and the lower part of the bumper in matte black. The chrome-plated underbody protection also functions as a diffuser and integrates the twin tailpipes.

Interior: The Dune team also revamped the interior, with two particular areas of attention. First, the dashpad—painted in the “Arizona” exterior color—doesn’t have the classic “kaeferfach” (or Beetle bin) on the passenger side. In this car, it has been replaced by another classic original Beetle feature, a grab handle that features contrasting black soft-touch material with “Arizona” and aluminum accents.

Second, the entire infotainment system incorporates a digital interface with a high-resolution 7.7-inch touchscreen. An AMOLED (Active Matrix Organic LED) display is used to render extremely fine detail. The digital display of the car’s pitch and roll is a tribute to the New Beetle Dune of 2000, which integrated the functions in the main instrumentation.

The Beetle Dune Concept integrates the “Volkswagen Sideways” app—a program that proactively integrates POIs into the navigation system. For example, the touchscreen not only displays the types and numbers of restaurants nearby, but also whether your friends are there. Upon request, the navigation system can guide the driver and the Dune right to the restaurant. The Sideways app also integrates information such as the weather in the POI instructions, so the driver would not be guided to an outdoor swimming pool in winter, for example.

The seat design is sophisticated and sporty. The outer surfaces of the front sport seats and the two rear seats are upholstered in “Titan Black” leather, while the center surfaces are made of “Ceramique” colored “Gobi” breathable sport fabric. The leather and fabric areas and the front and rear of the head restraints have decorative stitching in the “Arizona” color.

Mechanically, the Dune uses the running gear from the Beetle R-Line. Underhood, there’s a 210-hp turbocharged and direct-injection TSI® 2.0-liter four-cylinder engine. Combined with a six-speed DSG® dual-clutch automatic transmission, the Beetle Dune has a manufacturer estimated fuel economy rating of 23 mpg in the city and 29 mpg on the highway. The car retains the Beetle’s front-wheel-drive layout and strut-type front suspension and multilink rear arrangement. As with all U.S. Beetle R-Line models, the electronic XDS® differential is standard. 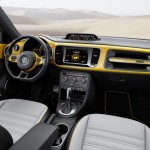 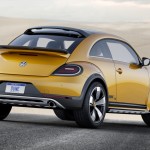 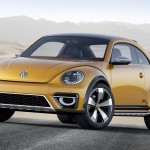