An eight hour long ride through the snow, very little sleep, very little food, digging a 370Z out of four  feet of snow, partying until 5am and a curse?!

Yup, just another day in Paradise as Alex the GM from Performance Motorsport had eloquently put. Travelling with the guys from Montreal to New York was definitely an adventure in itself but the real excitement was getting our hands on that sweet Nissan 370z and getting started on phase 1 modifications.

We've been waiting eight months to get this project off the ground and after it was all said and done, we were able to step back and ask the question..."Was it worth the wait?" and the answer..."HELL YEAH! And we can't wait to do it again.

Before I begin, let me tell you a little background story about my relationship with the city that never sleeps. It started when I was eight years old, in the Big Apple. During that first visit, the family van was towed and we had to pay $400 dollars to get it out, and in 1987 the exchange rate wasn’t very advantageous for us Canucks. Fast forward to the summer of ’96, 14 years old, in Manhattan, after an afternoon’s worth of sightseeing, we get back to where we were parked only to discover that one car was broken into, and luggage was stolen...wow, not a fun time at all. 2006, 24 years old, third time’s the charm, right? WRONG!

You have to understand that in Montreal the thing to do before going to the clubs is to pre-drink. No matter how or where, you just find a way to drink beforehand so you can save money while you’re in the club. Well we tried to save money, only this time our fun was stopped short by 4 undercover cops who ticketed us for drinking in the subway.

“Officer its orange juice, I swear”

Well...its 2011 and now being a semi-responsible yuppie, will the fourth time be the final straw? Or will it only get worse. Well...let’s find out.

We left Montreal pretty late and after a couple of food and bathroom breaks we finally arrived at the home where we were staying at about 4am.

The next day came pretty fast considering that we woke up at about 8:30am. We had to meet Manny from High End to where the 370z had been stashed for the past four months. We finally get to the car only to discover that it had been practically swallowed up by the snow that had fallen a few days prior. 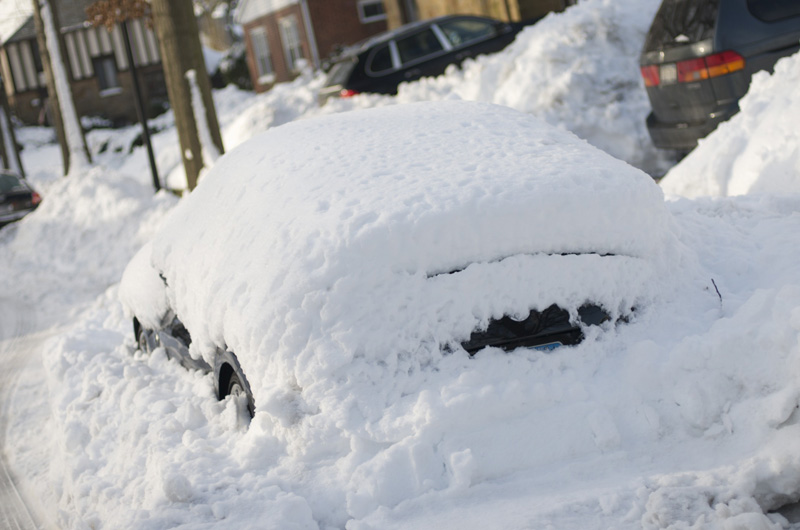 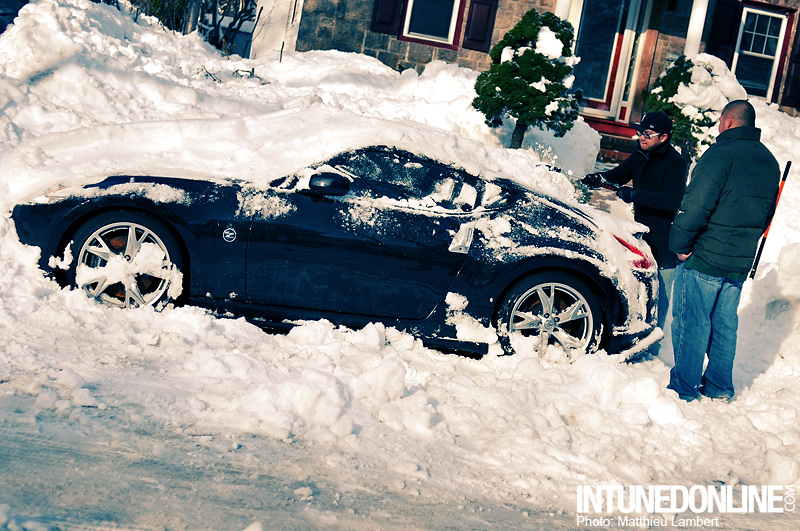 There was so much snow on this car that you would have never known if it were a car or a BBQ Grill under all of that powder. Well thanks to some good old fashion elbow grease, patience and team work the car was resurrected and high octane petrol filled the arteries of the 3.7 litre V6 once again. Ah...breathe it in! Sorry to all of our supporters and fans who were waiting for the stream to go live, I guess this stuff happens when you’re cursed. 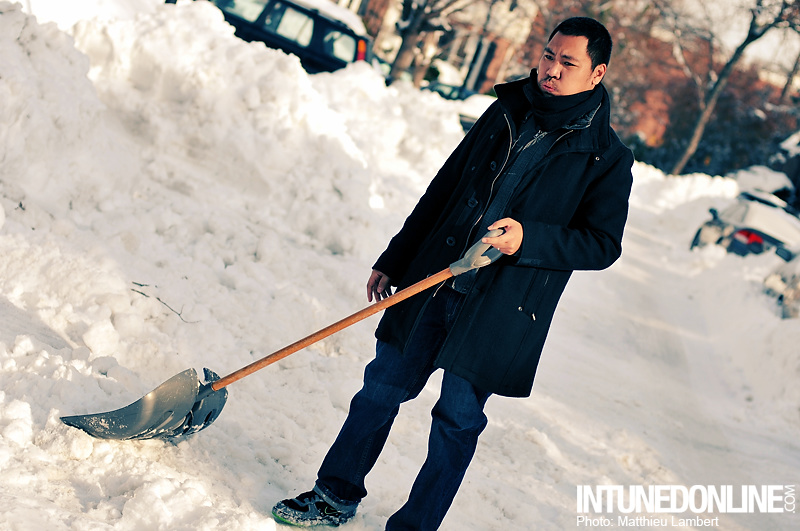 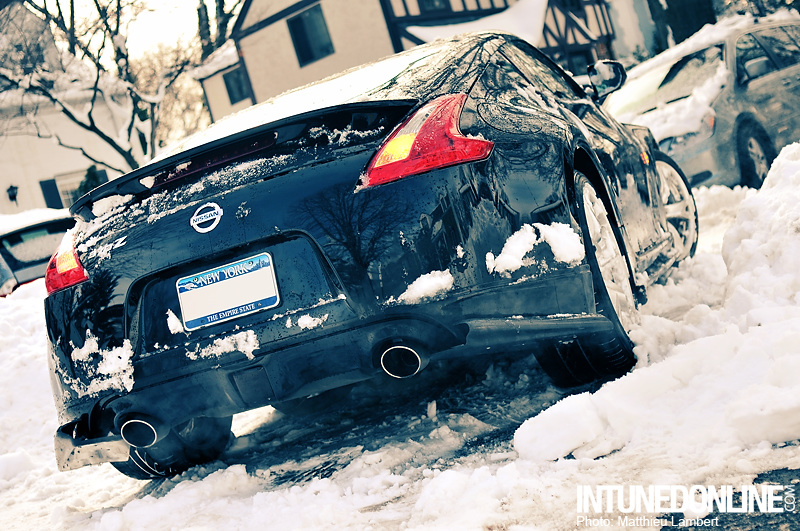 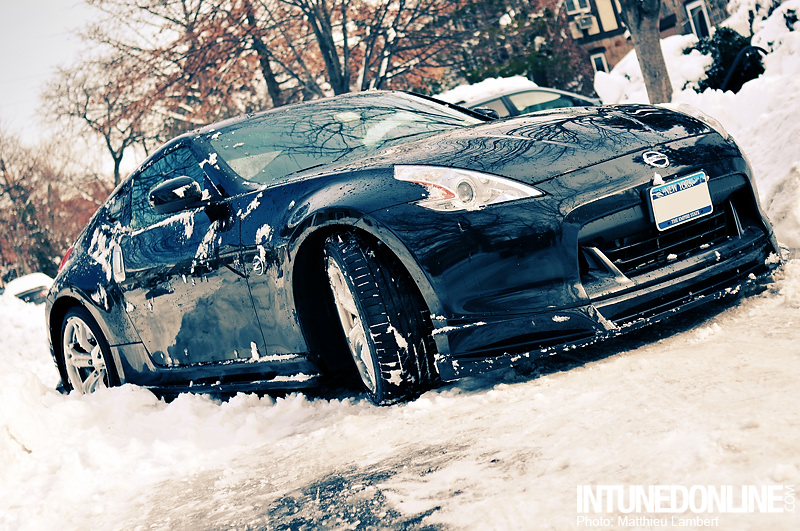 Two hours behind schedule we finally make it to Performance Motorsport and I have to say, considering the delay of our arrival, the guys in the shop were class acts through and through. I had a chance to meet Alex, the general manager of the shop whom I have to admit, is one of the sharpest and cleanest individuals I have ever encountered in a garage atmosphere. But don’t get it twisted, just because his hands aren’t dirty doesn’t mean he doesn’t know his stuff, he’ll know exactly what you need if it’s needed and whatever you do need for your ride, he’ll find it. Then we met one of the owners, Gary, who’s simple but not easy approach to tuning and performance has paved so much success for his shop that Performance Motorsport isn’t a name it’s a way of life. Gary is a true motor head with racing in his blood and the knowledge of tuning to boot, you can’t ask for a better combination of skill and experience. Performance Motorsports philosophy is simple, when modifying a car, if there isn’t a purpose then you don’t need it and if Alex can’t find it, then they’ll make it. With a garage that is on any real tuner’s fantasy list, it’s no wonder Gary and his team are an absolute force to be reckoned with. 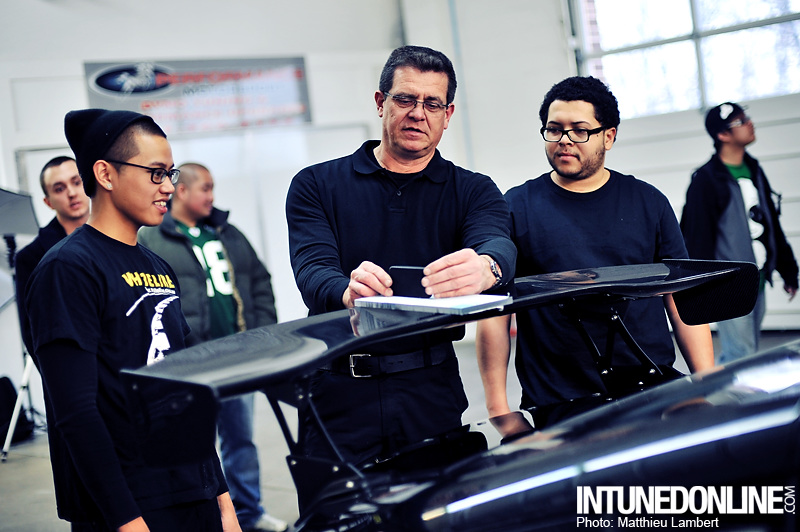 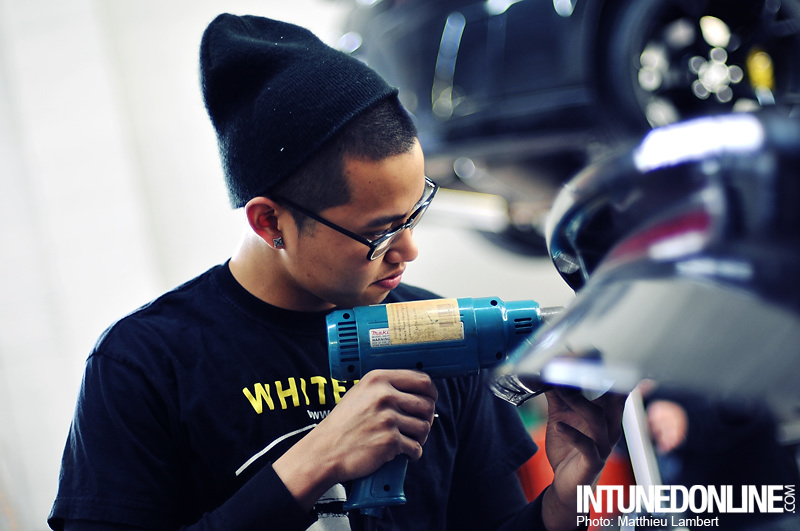 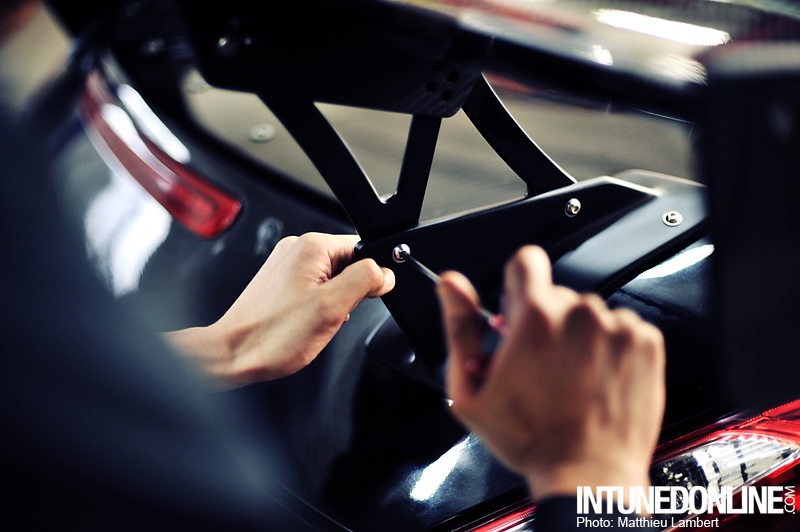 That is why we brought our 370z to Gary. Where we finally hoisted the car in the air and in no time the ARK cat back was installed and tested. Thanks to ARK, this exhaust system made the 370z come from sounding like a growling wolf to a ferocious lion gargling thunder. Then finally after eight months in the making the piece de resistance...the Voltex Carbon Fiber Wing...the first one to be delivered in North America. That’s right, its here, Intuned’s got it! it looks outstanding!...Haters start your engines! 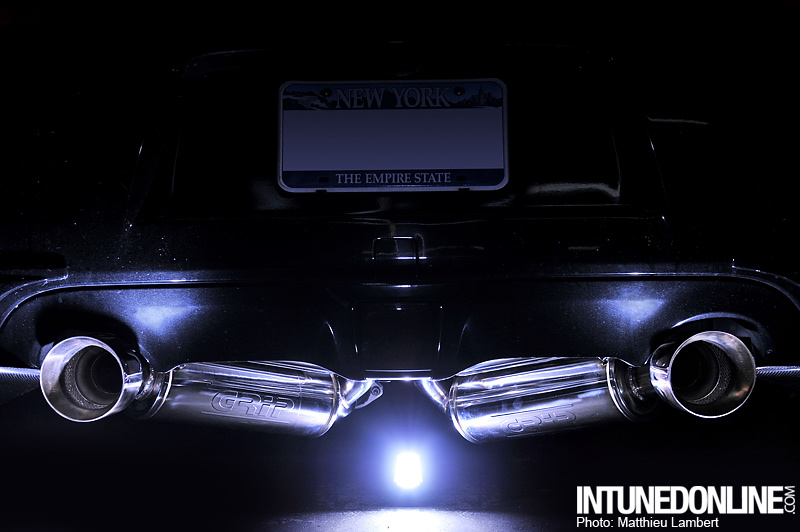 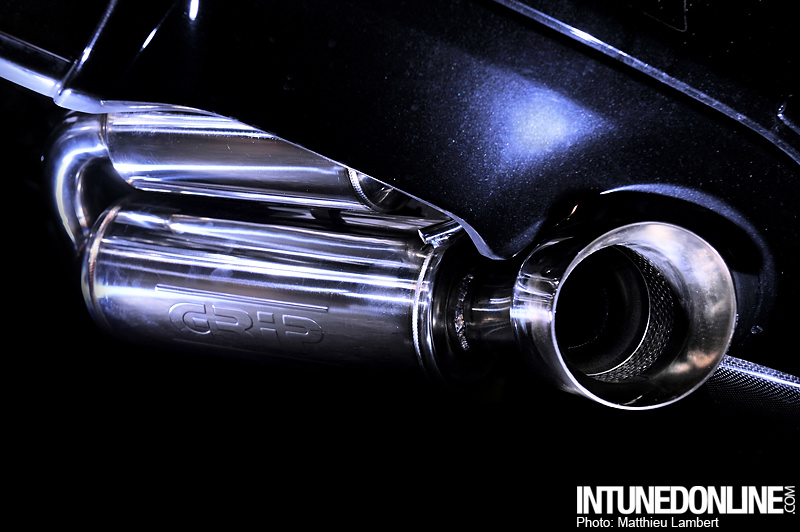 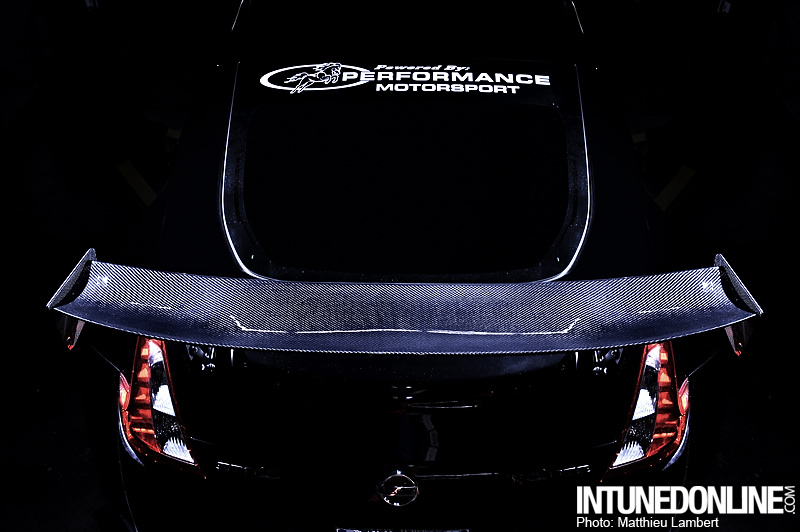 Well, after all that work, all the travelling, after all the photos, the interviews, the day was finally over. It was time to relax, head home, and get to bed, another day another dollar.....YEEEEAH RIGHT!!!

What do you think this is an IKEA catalogue?! This is INTUNEDONLINE, we don’t play around, we cover the cars and the lifestyle of the people that build these monsters of the road...You want the truth, well the truth is, we work hard we play hard, ask anybody who knows anything about this industry and that sleep...is for the weak.

A big shootout to the entire team at Performance Motorsport for showing us Montrealers how New York gets down, their hospitality was absolutely appreciated, in the heart of Manhattan we partied until the early morning, the music was bumping and the glasses were always full. Thanks again for reminding us that this is what the industry was built on; people getting together and sharing one common interest and sharing their passion with everyone else in the world. Company’s like Performance Motorsport help make your ideas become reality. Where ever you are, if you want your ride hooked up if you can make it to New York, then you have to check these guys out. You can start by visiting their website at www.theexperience.com , speak to Alex and let him know that Intunedonline sent you and they’ll show you how it’s done. 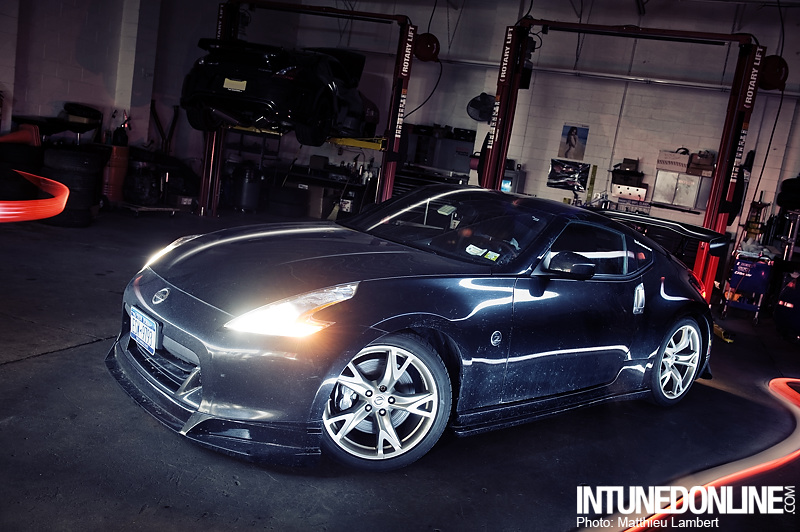 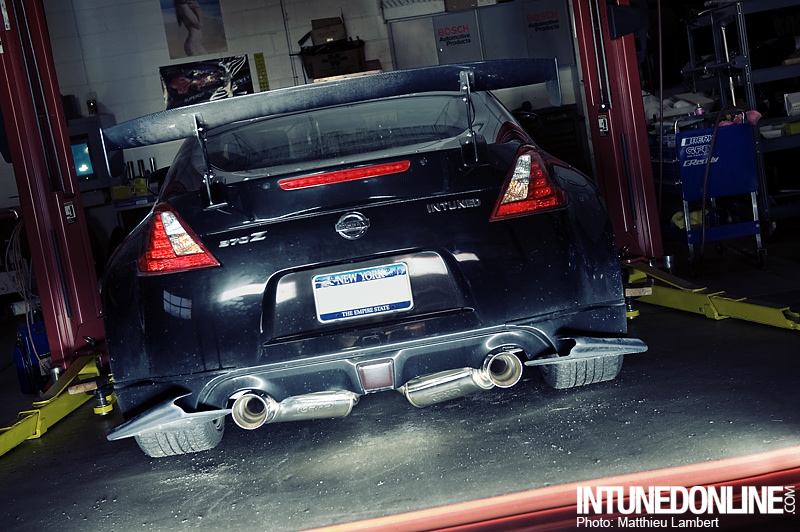 Meanwhile, we’re just getting started. We’ll be heading back to NYC to get Phase 2 up and running on the Z, check us out and stay intuned...