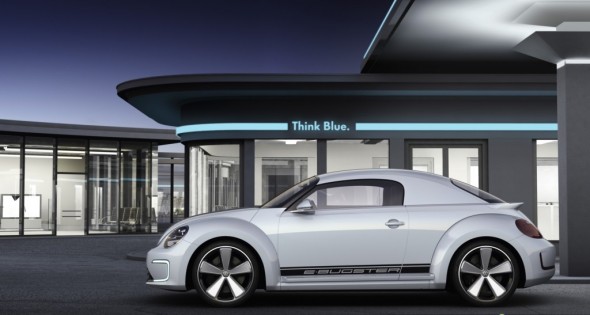 Volkswagen’s iconic Beetle has been redefined for the 21st century. Now, it has been further reinvented as a concept car for the future: the pure electric E-Bugster.

What’s in a Name?
The name “E-Bugster” is a combination of “E” for electric, “Bug,” the American nickname for the Beetle, and “speedster,” which typically describes an open-top two-seater. Although the E-Bugster concept is clearly not a convertible, it sports the typical speedster profile of shallow windows and a low, dramatic roofline.

Blue-e-motion for a Cleaner Future
At the electric heart of the E-Bugster is an electric motor that makes 114 horsepower (85 kW) and 199 pound-feet of torque. A lithium-ion battery enables the car to go more than 100 miles in zero emissions driving. Stored under the trunk floor and the rear bench, the battery weighs 695 pounds. The battery is recharged via a plug interface located underneath the hood’s VW logo and can accommodate all three types of available chargers: Level 1 (120V), Level 2 (240V), and, where available, Level 3 (quick charge, 80 percent charge in 30 minutes). Holistically, Volkswagen calls the electric drive unit used in the E-Bugster “Blue-e-motion,” and it will be found in future products such as the Golf Blue-e-Motion.

Unique Design
In addition to being a study in pure-electric mobility, the E-Bugster is also a dynamic study in Beetle design. Up front, the E-Bugster’s flat and wide windshield is distinctive. The E-Bugster utilizes LED Daytime Running Lights, just like the production Beetle, except that here they form a distinctive graphic on either side of the lower air intake in the front bumper. This LED graphic is mirrored by reflectors in the rear bumper. Ever since the e-up! concept car was presented in Europe, these unique DRLs have become a signature element on Volkswagen electric vehicle studies.
From the side, the E-Bugster’s low, flat roof serves to frame the rest of the vehicle’s distinctive features. Between its flared fenders and 20-inch wheels, there’s a distinctive Beetle “V” that runs along the side of the vehicle. Above its side sill, a decal with the “E-Bugster” signature can be seen. Just above this point, the chrome has been lengthened from the lower window border towards the rear of the car. The top of the E-Bugster extends in a flat arch over this chrome line and borders the vehicle’s side windows. The height between the chrome lower edge of these windows and the uppermost roof line is tight, like a chopped-down speedster. Overall, the Bugster is nearly three inches lower than a Beetle.

EV-specific instrumentation
A unique exterior look isn’t all that sets the E-Bugster apart from the production Beetle; it also sports EV-specific gauges inside. The traditional tachometer has been replaced with an energy consumption display that fluctuates with vehicle acceleration. Other instrumentation includes a driving range indicator, a display showing the battery’s charge state, and a display that shows the driver the intensity of battery regeneration. 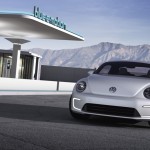 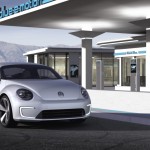 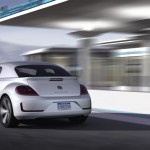 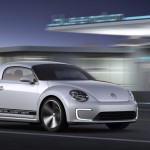 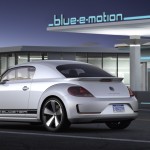 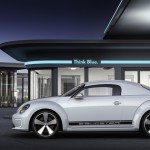 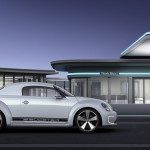 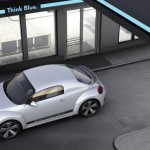 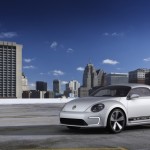 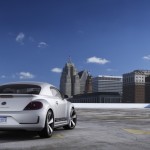 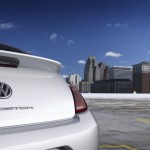 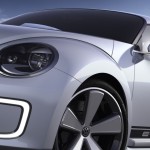 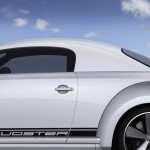 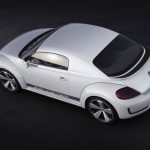